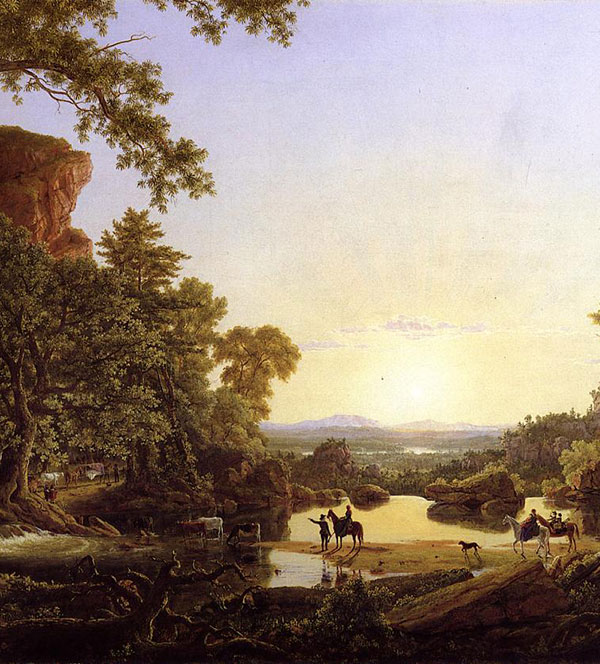 Thomas Hooker and company migrate to Connecticut. Detail from painting by Frederich Church.

Thomas Hooker was a Puritan preacher who left England under persecution and settled in Massachusetts. His congregation was unhappy in Massachusetts, though, and in June 1636 Hooker led about a hundred people to Hartford, Connecticut. About a year later they formed their own government. At the opening session of the General Court, on this day 31 May, 1638, Hooker preached a sermon that many historians see as the impulse for the colony’s Fundamental Orders, the modern world’s first written constitution, adopted in January 1639. We do not have the complete sermon, but only notes by Henry Wolcott, Jr. Those notes show a typical Puritan arrangement, in which appear doctrinal statements drawn from scripture, reasons to back up doctrinal assertions, and uses to which the teaching should be put. Today’s excerpt is adapted from a transcription made by Douglas Shepherd.

“1ST DOCTRINAL STATEMENT: The choice of public magistrates belongs unto the people by God’s own allowance

“2ND DOCTRINAL STATEMENT: The privilege of election which belongs to the people must not be exercised according to their whims but according to the blessed will and law of God.

“3RD DOCTRINAL STATEMENT: Those who have power to appoint officers and magistrates have it in their power also to set the bounds and limits of the power and places unto which they call them.

“1ST REASON: Because the foundation of authority is laid firstly in the free consent of people.

“2ND REASON: Because by a free choice the hearts of the people will be more inclined to the love of the persons and more ready to? yield obedience.

“3RD REASON: Because of that duty and engagement of the people.

“USE 2 Reproof to dash the conceits of all those that shall oppose it.

“DOCTRINAL STATEMENT: That the wants of all creatures in general and of man in particular are great and numberless

“USE 4 What course we should take to supply our great wants.”

Fiske, John. The Beginnings of New England: Or the Puritan Theocracy in its Relations to Civil and Religious Liberty. St. Louis, 1889.