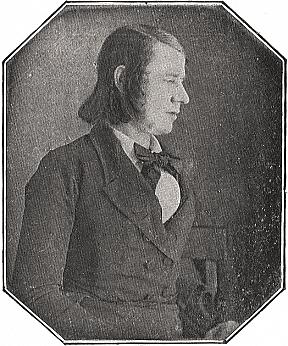 Isaac Hecker, founder of the Paulists.

As a young man, Isaac Hecker built clocks, published a Methodist paper, worked at a brass foundry, served as a baker, tried a communal living experiment at Brook Farm, and marched with workers demanding improved conditions. Nothing gave him inner peace. Finally he turned to the Catholic Church where he found what satisfied “his wants, his faith, his life, his soul.” He became a priest. Pope Pius IX encouraged him to found a new order dedicated to winning Americans to the Catholic faith. The result was the Paulists, whose primary instrument of outreach was the printed word: magazines such as Catholic World and Young Catholic, and millions of copies of books. Three years before his ordination as priest, he wrote to his mother from Brook Farm on this day, 16 May, 1843.

“Mother, I cannot express the depth of gratitude I feel toward you for the tender care and loving discipline with which you brought me up to manhood. Without it, oh! what might I not have been? The good that I have, under God, I am conscious that I am greatly indebted to thee for; at times I feel that it is thou acting in me, and that there is nothing that can ever separate us. A bond which is as eternal as our immortality, our life, binds us together and cannot be broken.

“Mother, that I should be away from home at present no doubt makes you sorrowful often, and you wish me back. Let me tell you how it is with me. The life which surrounds me in New York oppresses me, contracts my feelings, and abridges my liberty. . . .

“. . . I am aware that my future state here, and hence hereafter, will greatly depend upon the steps I now take, and  therefore I would do nothing unadvised or hastily. I would not sacrifice eternal for worldly life. At present I wish to live a true life, desiring nothing external, seeing that things external cannot procure those things for and in which I live. I do not renounce things, but feel no inclination for them. All is indifferent to me—poverty or riches, life or death. I am loosed….”