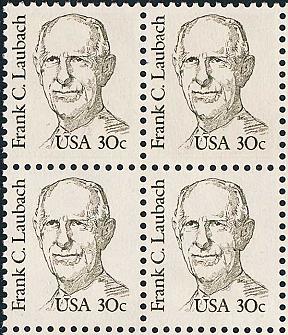 Frank Laubach was a missionary to the Philippines, where poverty and injustice dogged the Muslims on Mindanao Island. Recognizing that the people could do more to help themselves if they knew how to read, Laubach developed simple literacy material. By teaching them to read and studying the Koran with them, he won many to Christ. One of his innovations was to enlist those who had just learned to read to teach others. “Each one teach one,” was Laubach’s slogan. Missionaries and governments worldwide adapted his methods, with the result that over one hundred million people gained the ability to read.

Laubach’s strength was an extension of his faith. He advocated spending the day in Christ’s presence. “All during the day, in the chinks of time between the things we find ourselves obliged to do, there are the moments when our minds ask: ‘What next?’ In these chinks of time, ask Him: ‘Lord, think Thy thoughts in my mind.’ ...If we persist, it becomes a habit.” He wrote about this practice in letters to his father. Today’s letter was dated April 19, 1930 tells a little of the difficulties he found this in practice.

Fellowship with God is something one dare not cover, for it smothers to death. It is like a tender infant or a delicate little plant, for a long nurturing is the price of having it, while it vanishes in a second of time, the very moment indeed, one's eye ceases to be “single.” One cannot worship God and Mammon for the reason that God slips out and is gone as soon as we try to seat some other unworthy affection beside Him. The other idol stays and God vanishes. Not because God is “a jealous God” but because sincerity and insincerity are contradictions and cannot both exist at the same time in the same place.