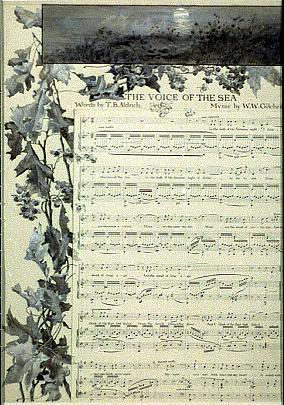 A score by W.W. Gilchrist.

William Wallace (W.W.) Gilchrist was a major figure in nineteenth-century American music—founder of the Mendelssohn Club and leader of many other musical societies and organizations. He was also a composer, writing primarily religious works. Camille Saint-Saens and Carl Reinecke were among the judges who awarded him a large prize for his composition Psalm 46. Today his work is almost unknown, even the compositions that he wrote as hymns, because they lacked the charm and simplicity of other great congregational music.

On this day April 1, 1909, seven years before his death, the Cathedral of St. John the Divine, New York City produced Gilchrist’s passion oratorio The Lamb of God. It combined choral settings with Scripture readings selected by him.

“Follow to the judgment hall;
View the Lord of Life arraigned;
O the wormwood and the gall!
O the pangs His soul sustained!
Shun not suffering, shame, nor loss;
Learn of Him to bear your cross.