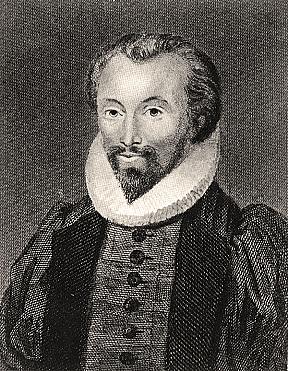 After a racy youth, John Donne eloped with his employer’s niece, who cut her off without a penny. The Donnes descended into poverty from which John only emerged after becoming Dean of St. Paul’s. Meanwhile his wife, Anne, died in childbirth, casting a shadow over his remaining years. He became obsessed with death, writing essays such as “Death’s Duel” and poems such as “Hymn to the Father” in which he expresses his fear that he will perish eternally when he has spun his last thread. One of his most famous poems begins “Death be not proud.” Dying, he wrote yet another famous poem about death on this day, March 23, 1630.

“Since I am coming to that holy room,
Where, with Thy Choir of Saints, for evermore
I shall be made Thy music, as I come
I tune my instrument here at the door,
And, what I must do then, think here before….

“We think that Paradise and Calvary,
Christ’s cross, and Adam’s tree, stood in one place;
Look, Lord, and find both Adams met in me;
As the first Adam’s sweat surrounds my face,
May the last Adam’s blood my soul embrace.

“So, in His purple wrapt, receive my Lord!
By these His thorns, give me His other Crown
And, as to other souls I preach’d Thy word,
Be this my text, my sermon to mine own,
‘That He may raise; therefore the Lord throws down.’”