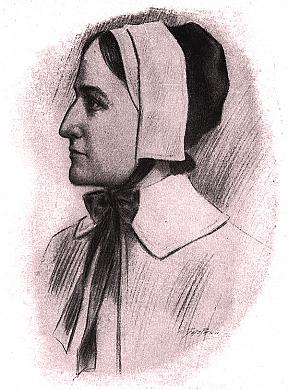 Impressed with the preaching of John Cotton of Boston, England, William and Anne Hutchinson went to hear him as often as they could and migrated like him to Massachusetts. Anne taught a women’s class that many men attended. She may have denied original sin; she certainly emphasized grace more than did the more strictly Calvinistic Puritans, so much so that she was labeled an “antinomian”—one who is against law. She believed that God’s spirit taught and guided her. Eventually she was put on trial as a threat to the spiritual unity of the colony. On this day March 22, 1638, she apologized and submitted, but governor John Winthrop soon banished her from the colony anyhow, claiming her submission was not genuine.

“As my sin hath been open, so I think it needful to acknowledge how I first came to fall into these errors. Instead of looking upon myself I looked at men. . . . I spoke rashly and unadvisedly. I do not allow the slighting of ministers, nor of the scriptures, nor anything that is set up by God: if Mr. Shepard doth conceive that I had any of these things in my mind, then he is deceaved [deceived]. It was never in my heart to slight any man, but only that man should be kept in his own place and not set in the room of God.”