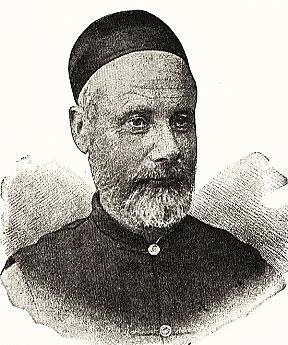 James Gilmour was converted to Christianity as a young man. While attending the University of Glasgow, he decided to become a minister of the gospel and concluded that the greatest need was in foreign lands; Christ’s words, “Go ye into all the world and preach the gospel” seemed intended for him. On this day February 10, 1870, in Augustine Chapel, Edinburgh, the London Missionary Society ordained him for service in Mongolia. At his ordination he gave a statement of his calling from which we take today’s extract. Twelve days later, he sailed from Liverpool. In Asia, he lived a life of sincere faith and endured severe hardship in order to evangelize China and Mongolia.

“…After prayerful consideration and mature deliberation, I thought it my duty to offer myself as a candidate for the ministry.

“Having decided as to the capacity in which I should labour in Christ’s kingdom, the next thing which occupied my serious attention was the locality where I should labour. Occasionally, before, I had thought of the relative claims of the home and foreign fields, but during the summer session in Edinburgh I thought the matter out, and decided for the mission field; even on the low ground of common sense I seemed to be called to be a missionary. Is the kingdom a harvest field? Then I thought it reasonable that I should seek to work where the work was most abundant and the workers fewest. Labourers say they are over-taxed at home; what then must be the case abroad, where there are wide stretching plains already white to harvest, with scarcely here and there a solitary reaper? To me the soul of an Indian seemed as precious as the soul of an Englishman, and the Gospel as much for the Chinese as for the European; and as the band of missionaries was few compared with the company of home ministers, it seemed to me clearly to be my duty to go abroad.”