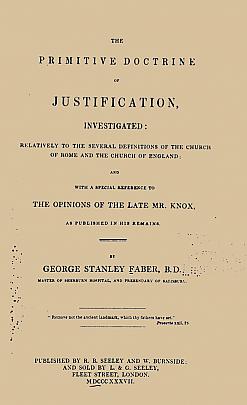 George Stanley Faber was a nineteenth-century Anglican theologian, strongly evangelical in outlook, who wrote many books. One of his best-known works refuted opponents of the Trinity by showing, with careful documentation, that both Jesus and the Holy Spirit were worshiped as God before the Council of Nicea settled the doctrine in AD 325. Another book treated the primitive church’s understanding of justification. A third valuable work traced the doctrine of election to its earliest appearances in the church fathers.

Faber contended that the system of election, which he found to be received and taught by churchmen of the two first centuries, would reveal the real meaning of disputed Bible passages on election and make possible an end to the endless quarrels between theological camps. He concluded that neither Arminianism nor Calvinism was taught by the earliest church, but rather a system in which Christians are elected into the body of Christ (i.e.: the church) but then must utilize the graces offered them there in order to go on to final salvation. Here is a quote from his introduction to The Primitive Doctrine of Election, dated this day, 6 December 1834.

“To prevent any misapprehension as to the nature and object of the present Work, it may be proper, once for all, to state : that, agreeably to its title, I wish it to be considered, not as controversial according to the usual import of the term controversial, but altogether as historically inquisitorial.

“Doctrinal Accuracy is, at all times and in all cases, desirable: and, even on points which are so far open that they involve not, either by their admission or by their rejection, our eternal welfare, it is better to theologise correctly, than to theologise incorrectly.

“With a sole view, then, to Doctrinal Accuracy, and not for the purpose of what is called writing against any particular class of opinions, I have instituted this Inquiry (and I would have it deemed only an Inquiry) into the sentiments of the Primitive Church, and, through the medium of those sentiments, into the real mind of the holy revealed word of God.

Yet, in prosecuting such an inquiry, it is obvious that the Truth could not be ascertained without a collateral exhibition and rejection of Error.

“Nevertheless, since my researches lead me to esteem both [sic] Arminianism and Nationalism and Calvinism, as alike, though in different degrees, erroneous; because they have alike, though in different degrees, departed from the apostolic judgment of the earliest Christian Antiquity: I may perhaps, if I can claim nothing else, at least hope fairly to claim the praise of rigid and honest impartiality.”

Faber, George Stanley. The Primitive Doctrine of Election, or an Enquiry into Scriptural Election as received in the Primitive Church of Christ. New York: Charles Henry, 1840.