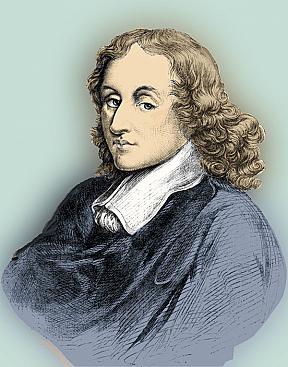 Blaise Pascal was a child prodigy, mathematician, physicist, inventor, writer, and Christian philosopher. He studied hydraulics, demonstrated the existence of vacuum, developed a system of public transportation, invented a mechanical calculator, advanced mathematical theories (especially the laws of chance), wrote a defense of a Catholic reform movement known as Jansenism, and collected notes for a book of Christian apologetics known as Pensées (Thoughts). On this day, 17 October 1651 he wrote a lengthy letter to a woman named Madame Perier and her husband, regarding the death of his own father. One paragraph said,

“Every thing is sweet in Jesus Christ, even to death: and this is why he suffered and died to sanctify death and suffering and, in common with God and man, he has been all that was great, and all that was abject, in order to sanctify in himself all things except sin, and to be the model of every condition.”