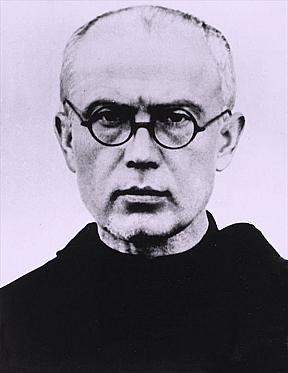 Maximillian Kolbe, who gave his life to save another.

On this day, 10 October 1982, Pope John Paul II gave a homily for the canonization of Maximilian Kolbe, a priest who had volunteered to die in place of Sergeant Francis Gajowniczek, a fellow prisoner at Auschwitz during World War II. Kolbe reasoned that Gajowniczek had a wife and children, whereas he did not.

“Greater love has no man than this, that a man lay down his life for his friends (John 15:13).

“From today on, the Church desires to address as ‘Saint’ a man who was granted the grace of carrying out these words of the Redeemer in an absolutely literal manner.

“For towards the end of July, 1941, when the camp commander ordered the prisoners destined to die of starvation to fall in line, this man—Maximilian Maria Kolbe—spontaneously came forward and declared himself ready to go to death in the place of one of them. This readiness was accepted and, after more than two weeks of torment caused by starvation, Father Maximilian’s life was ended with a lethal injection on August 14, 1941. . . .

“And so, in virtue of my apostolic authority, I have decreed that Maximilian Maria Kolbe—who after his Beatification was venerated as a Confessor—shall henceforeward be venerated also as a Martyr!

“Precious in the eyes of the Lord is the death of his faithful ones! Amen”