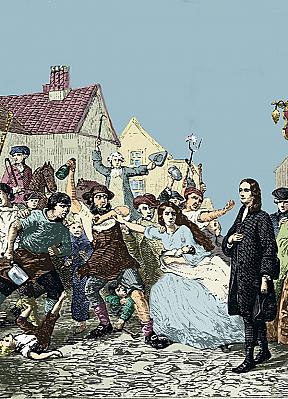 John Wesley encountered great opposition as he carried the gospel throughout England. His journal recounts many instances, but few can rival the episode in Shepton on Friday January 12, 1748.

“After preaching at Oakhill about noon, I rode on to Shepton, and found them all under a strange consternation. A mob, they said, was hired, prepared, and made sufficiently drunk, in order to do all manner of mischief….After we were gone into the house, they began throwing great stones, in order to break the door; but perceiving this would require some time, they dropped that design for the present. They first broke all the tiles on the pent-house over the door, and then poured in a shower of stones at the windows. One of their Captains in his great zeal, had followed us into the house, and was now shut in with us. He did not like this, and would fain have got out; but it was not possible. So he kept as close to me as he could, thinking himself safe when he was near me. But staying a little behind, when I went up two pair of stairs, and stood close on one side, where we were a little sheltered, a large stone struck him on the forehead, and the blood spouted out like a stream. He cried out, ‘O Sir, are we to die to-night ? What must I do? What must I do?’

“I said, ‘Pray to God. He is able to deliver you from all danger.’ He took my advice, and began praying in such a manner, as he had scarce done ever since he was born.

“Mr. Swindels and I then went to prayer: after which I told him, ‘We must not stay here; We must go down immediately.’

“He said, ‘Sir, we cannot stir, you see how the stones fly about.’ I walked straight through the room, and down the stairs; and not a stone came in, till we were at the bottom. The mob had just broke open the door, when we came into the lower room; and exactly while they burst in at one door, we walked out at the other. Nor did one man take any notice of us, though we were within five yards of each other.

“They filled the house at once, and proposed setting it on fire; but one of them happening to remember that his own house was next, with much ado persuaded them not to do it. Hearing one of them cry out, “They are gone over the grounds,” I thought the advice was good. So we went over the grounds to the farther end of the town, where Abraham Jenkins waited, and undertook to guide us to Oak-hill.

“I was riding on in Shepton-lane, it being now quite dark, when he cried out, ‘Come down: come down from the bank.’ I did as I was bid; but the bank being high, and the side very near perpendicular, I came down all at once, my horse and I tumbling one over another. But we both rose unhurt. In less than an hour we came to Oak-hill, and the next morning to Bristol.”