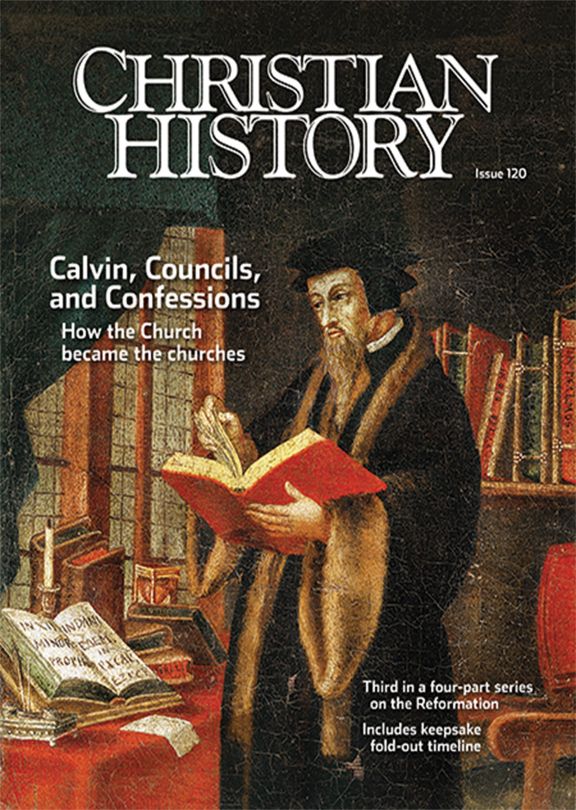 As the reform movement spread and splintered across Europe in the mid-sixteenth century, each offshoot searched for and strengthened its identity through various confessions and creeds. On this scene stepped John Calvin, the hopeful priest turned reluctant lawyer who became one of the world's most influential reformers. Read his story along with the story of the divisions, martyrdoms, victories, and disappointments that marked the last half of the sixteenth century in this third Reformation issue of Christian History.

It’s the middle of the sixteenth century, and earth-shattering ideas of reform have spread across all of Europe while hope for reunion with the Roman Catholic Church has faded. As “Lutherans” flounder in their search for new leadership, followers of Zwingli thrive in the cities; believers in England bounce between Catholic and Protestant monarchs, and Anabaptists find their voice through a guy known simply as “Menno.” Onto this stage steps John Calvin, the hopeful priest turned reluctant lawyer whose fateful stopover in the city of Geneva transformed him into an incredibly influential reformer. Read his story along with the story of the divisions, martyrdoms, victories, and disappointments of the last half of the 16th century in the this issue of Christian History, the third in our series of four chronicling the Reformation. Includes keepsake foldout timeline on the Reformation