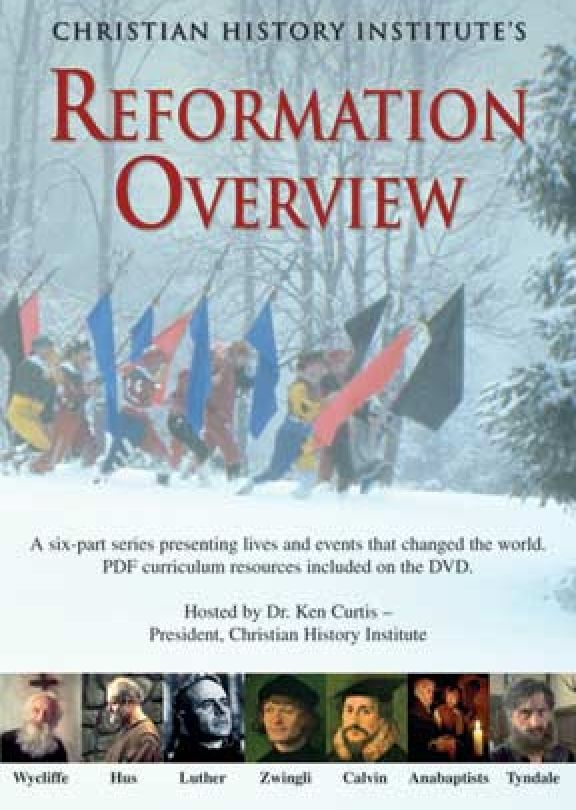 1. John Wycliffe - Called the "Morningstar," this courageous forerunner paved the way for momentous changes to come. His teachings challenged the authorities, but they exiled him, and his exile provided the opportunity for his monumental achievement that has benefitted us all -- the Bible in English.

2. John Hus - He carried forth Wycliffe's groundbreaking work. His passionate calls for reform brought him before the Council of Constance. There he was betrayed by false accusations. He refused to capitulate and was condemned to burn at the stake. He died singing.

3. Martin Luther - He wanted only the quiet solitude of the monastery. There this guilt-burdened monk discovered the freedom of the Gospel. He couldn't keep quiet about it, nor could he stop the relentless swirl of events that propelled him to a decisive role in the shaping of the modern world.

4. Ulrich Zwingli and John Calvin - They led the Reformation in Switzerland. Both capable scholars, they had to interpret the newly recovered dimensions of the Gospel in the midst of a hurricane of change, social chaos and fierce opposition. From Zurich and Geneva their writings and developments would permeate the church worldwide.

5. The Anabaptists - Called "the Radicals," they were opposed by just about everyone--Catholics, Protestants, and political leaders. Two of their earliest leaders, Michael and Margaretha Sattler, were executed for their beliefs while still young, but their legacy endures to this day.

6. God's Outlaw: William Tyndale - This humble, young scholar became one of the most hunted fugitives ever, pursued by King Henry VIII, Cardinal Wolsey, Sir Thomas More and others. His crime? Translating and circulating the Bible in English. He was caught and killed, but his unquenchable vision was marvelously fulfilled.

Amish: A People Of Preservation