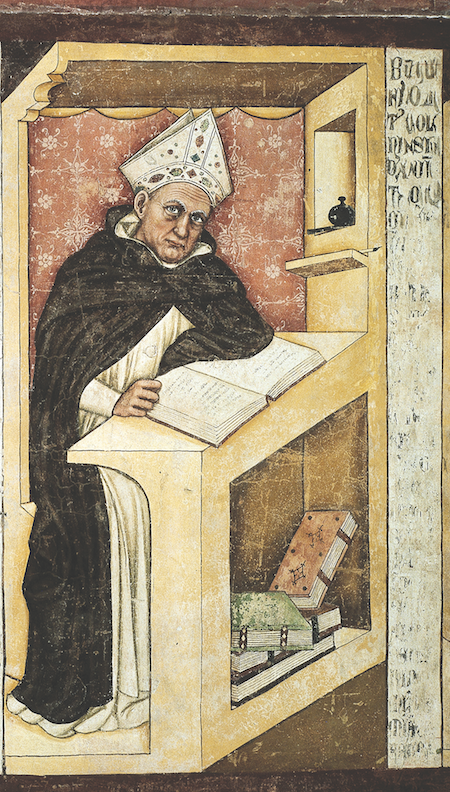 Historian Etienne Gilson once remarked that Albert the Great (1200–1280) is far less known than he is celebrated. Indeed, if Albert is known at all today, it is most likely as the teacher of Thomas Aquinas (1225–1274). Yet in his own day, Albert’s fame far exceeded that of his student and fellow Dominican. While Thomas was still young and relatively unknown, Albert already bore the title Magnus, “the Great,” in honor of his vast learning.

The thirteenth century’s “gossip columnist,” Roger Bacon, with clear outrage and perhaps a bit of envy, complained that most students, and even some very learned men, considered Albert as much of an authority on philosophy as the renowned Aristotle—even though Albert was still alive! Bacon clearly believed this an unprecedented indecency. Yet Bacon would have had to admit Albert’s substantial contributions to the intellectual life of his time.

To truly understand Albert’s contribution, it is necessary to see it in the historical context in which it was conceived and carried out. Albert was born in the Danube town of Lauingen; instead of pursuing his father’s military profession, he left home for the university town of Padua to study the liberal arts. There he met a Dominican friar, Jordan of Saxony, who inspired him to join the newly founded Order of Preachers. By 1228 Albert had completed his novitiate and four years of theological study. His scientific and theological talents became obvious, resulting in subsequent advanced studies at the University of Paris.

All this occurred against the background of a profound event in intellectual history: the recovery of Aristotle’s books in Latin-speaking western Europe during the decades preceding Albert’s birth. The significance of this lay in the contents of these books primarily devoted to the natural sciences. Some 1,500 years earlier, Aristotle had worked out the basic structure of an empirical research program and had himself conducted research in biology and other sciences. By the time Albert was a student at Paris, Aristotle’s natural science was just beginning to make an impact on the intellectual life of the Latin Christian West.

The story of Albert’s own impact essentially began in the year 1249 when Albert, who had been a Dominican for about two decades, finally yielded to the pleas of his Dominican colleagues to compose a work explaining Aristotle’s natural science. Albert had come to the University of Paris six years before as a professor of theology while teaching under the direction of the Dominican theologian Guérric of St. Quentin. In 1245 he succeeded Guérric as a lecturer and held this chair until 1248.

But Albert’s learning was not confined to theology alone. His colleagues soon recognized his skills in the natural sciences and began asking him to compose an introduction to Aristotle’s books on nature. Albert put the brothers off for three years until the Dominican master general ordered him to resign his professorship at Paris and establish a school of theology at Cologne.

Thus in the hot dusty summer of 1248, Albert and a small band of Dominican friars (including the young Aquinas) made their way on foot along the old Roman road flanking the Rhine River to the Priory of the Holy Cross in Cologne. The following year Albert finally began work on the long-requested guide to Aristotle’s books on the empirical sciences, including cosmology, meteorology, biology, and many others.

It didn’t take long for the reluctant writer to find his footing. Albert first finished an ambitious commentary explaining Aristotle’s Physics (a treatise on the general principles of nature). Yet his ultimate goal was far greater. Albert had been trained in theology and mandated by his religious superiors to establish a seminary, but now additionally devoted himself to long-term research in the natural sciences.

From the very beginning of his commentary, Albert declared that he was setting out to make the newly discovered learning of Aristotle intelligible to Latin readers. Indeed Albert wrote what some called the world’s first encyclopedia, covering far more than his Dominican brethren could have imagined. He did this while continuing to teach, rising in the Dominican Order, becoming a bishop, and finally being relieved of that job by the pope so he could preach the Crusades. (As a bishop he refused to travel through his diocese on a horse and was nicknamed Boots the Bishop by his flock!)

Albert followed up his elementary guide to Aristotle’s Physics with a systematic and learned treatment of the whole of human knowledge—in one modern edition, it encompasses 38 volumes. He treated, in orderly fashion, all the natural sciences—both celestial and terrestrial. In addition he wrote on mathematics, logic, rhetoric, ethics, economics, politics, and metaphysics. Albert intended all this from the start and carried out his plan in a deliberate and systematic way following the order of Aristotle’s books.

Albert’s procedure was to report on Aristotle’s original research, describing his methods and conclusions. However, he did not stop there, for he extended and updated Aristotle at nearly every turn. To Aristotle’s extensive zoological studies, for example, Albert added equally extensive descriptions of species Aristotle had not known, including his own original research. He also added books on sciences not treated by Aristotle, but clearly needed to complete the Aristotelian program of empirical studies, such as mineralogy and geomorphology. In addition he provided careful studies of Aristotle’s scientific method, showing how Aristotle had established the essential elements of a scientific research program. Indeed Albert’s treatment of Aristotle’s scientific writings was comprehensively planned, carried out deliberately, and operated in accordance with a carefully defined understanding of the place of scientific learning in Christian culture.

But Albert’s voluminous writing was just the beginning. He established a groundbreaking curriculum at Cologne by stressing empirical study as a key element in robust Christian formation. Though the sacred Scriptures and the works of the church fathers remained the primary sources for theological studies, Albert added Aristotle’s books to the typical curriculum, including books on the empirical sciences.

During the academic year 1257–1258, for example, Albert supplemented his lectures on the Gospels with lectures on Aristotle’s zoological treatises, guiding his students in replicating some of Aristotle’s original experiments and even involving them in original zoological field studies. Clearly Albert considered that those preparing for the priesthood would not only require knowledge of the Scriptures but also an appreciation for the order and intelligibility of nature.

Before the reception of Aristotelian science in the then newly established universities, higher education had been mostly confined to theology. The seven liberal arts—grammar, logic, rhetoric, arithmetic, geometry, proportions, and mathematical astronomy—were studied in early medieval monastic schools, but mostly as a preparation for advanced theological studies. This now radically changed. For the first time, European scholars had access to an extensive body of empirical studies as well as a detailed account of a method for conducting science with promise of future scientific progress. This resulted in a medieval scientific revolution, initiating the common use of experimental methods upon which modern science was eventually based. By the time of his death in 1280, Albert was accepted as the primary medieval authority on these methods, and his work influenced Galileo and other early modern scientists.

Albert’s dissemination and extension of Aristotle were not unique, though. Equally fascinated by the research potentials of the new science, others also commented on Aristotle’s books and pursued empirical studies modeled on Aristotle. Rather, Albert’s special merit lies in the fact that he was the first scholar to clearly define the rightful place of scientific learning in Christianity. Albert passed this on to his most talented student, Aquinas, who would go on to demonstrate that scientific knowledge of nature is both compatible with and supportive of Christian doctrine.

This meaning has not been lost on the church, then or now. In 1941, in the dark days of World War II, Pope Pius XII declared Albert patron saint of those who devote themselves to research in the natural sciences. When some wielded scientific learning only to bring about suffering and destruction, the pope proposed a different place for science in human affairs, pointing to Albert as a model of how “science and faith can flourish harmoniously” in human culture. CH

Michael W. Tkacz is the Bernard J. Coughlin, S.J. Professor of Christian Philosophy at Gonzaga University and president of the Society for Thomistic Natural Philosophy. He is the author of The Second Liberal Art and Augustine: The Political Writings as well as many articles on medieval natural philosophy.