It Happened on SEPTEMBER 7

IDA SCUDDER AND THE HOSPITAL FAITH BUILT IN VELLORE 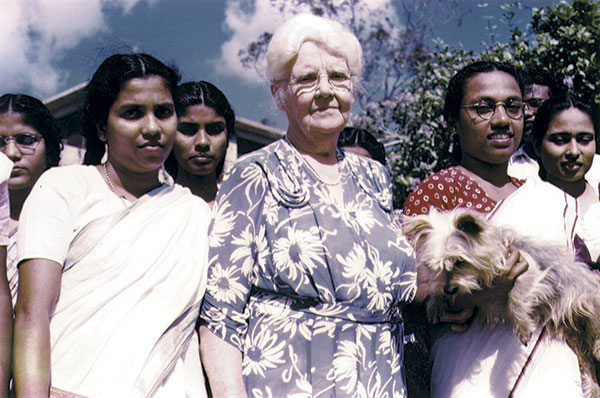 IDA SCUDDER wanted to leave hot, overcrowded India for "the good life." Although she had been born in India to a medical missionary family, her childhood memories were bleak. She had been forced as a small girl to feed children too weak to feed themselves and had seen tiny corpses lying beside the road. India was not for her. She went away to college, returning—as she thought—only for a visit.

However, Ida’s feelings changed on that visit, during one terrible night in 1892. As she was reading, a high-caste Brahmin stepped onto her veranda. He asked her to come attend his child-wife, who was in labor. The barber women had done all they could. Without help, the girl would die. Ida replied that she knew nothing about midwifery. Her father, a skilled doctor, was not at home, but she would take him to the girl as soon as he returned. The Brahmin refused. “She had better die than have a man come into the house,” he said. Ida felt pity, but what could she do?

Again there were footsteps on the veranda. Was the Brahmin back? Ida ran downstairs, where she found a Mohammedan who pleaded with her to come help his wife who was dying in labor. Ida’s father offered to go, but the Mohammedan refused. He was firm: he could not let a foreign male approach her. Ida returned to her room.

A third time she heard footsteps, and, to her horror, a third man appeared. A high-caste Hindu, he too had a young wife dying in labor. He wanted to know if Ida would come, because only a woman could tend his wife.

Ida spent the night in anguish and prayer.

Early in the morning I heard the ‘tom-tom’ beating in the village and it struck terror in my heart, for it was a death message. I sent our servant, who had come up early, to the village to find out the fate of these three women, and he came back saying that all of them had died during the night. . . . Again I shut myself in my room and thought very seriously about the condition of the Indian women and, after much thought and prayer, I went to my father and mother and told them that I must go home and study medicine, and come back to India to help such women.

Fortunately for Ida, her plan did not seem preposterous. Women had recently won the right to attend medical school. And the well-known Clara Swain had already served in India as a medical missionary.

When Ida next returned to India in 1900 it was as a doctor. She also had a substantial sum of money with which to build a women’s hospital in Vellore. This had come to her miraculously. Mission leaders had asked Ida to raise the funds for building the hospital before she left. “But I sail for India in a week!” she had protested.

“We have a letter from Dr. Louisa Hart. She suggests you.”

“$8,000 is more realistic,” said the men. “We doubt you’ll be able to raise even half that amount, but you can try.” Ida felt that the mission leaders were wrong. If the money was needed, God would provide it. However, a week wasn't much time. She threw herself into fundraising, calling on anyone she thought might be able to help. Dollars came in a trickle—“an ounce of water to quench an elephant’s thirst,” she said. Was the board right?

A friend mentioned Harriet Taber, president of a missionary society, who lived nearby. Ida threw on a shawl and hurried to Harriet’s home. There she poured out her heart, telling Harriet of India’s need and her own call to the work. Harriet arranged for Ida to speak to the women’s missionary society the following Monday.

On Sunday morning Ida received a note asking her to call next day on Mr. Schell. President of a bank, he was the brother-in-law of Harriet Taber and a known tightwad. Ida thought he might be good for $500, so she paid the call.

Unknown to her, Schell had overheard her impassioned plea to Harriet. Now he peppered the young woman with questions. Satisfied, he wrote a check. When Ida saw its size, she could hardly contain herself for delight. It was for $10,000! “Now there, there would have been my $50,000 if you had not stopped me!” she chided the board.

India’s need was overwhelming. While waiting for the hospital to be built, Ida turned an eight-by-twelve room in her home into a dispensary. However, suspicion kept the Tamil Indians away. Her first call was to a desperate case for whom she could do nothing. Word sped that her patient had died, and suspicion increased.

Eventually, a high-caste Hindu woman came to Ida to have her eyes examined. She had a dangerous case of conjunctivitis which Ida treated successfully. Demands for her services increased. Soon she was seeing so many cases that she had to conscript her kitchen maid to help her. Salomi was the first of many nurses Ida would train. Compassion drove Ida to take on more and more work, and she saw as many as 500 cases a day.

Meanwhile, plans for the hospital were nearing completion. On this day 7 September 1901, the cornerstone was laid during a furious rainstorm. Ida soon added teaching to her duties. Her first seven nurses graduated in 1905. By 1922 she had seen her first class of home-trained doctors graduate—all her women trainees passed while only 20% of male candidates did. Vellore officially became a medical college in 1928. British and Indian officials presented her with high awards and Gandhi visited her. She died in 1959 after spending the day holding patients’ hands and quieting babies while doctors treated them. Vellore Hospital operates to this day, a testimony to her vision and faith.