It Happened on AUGUST 10 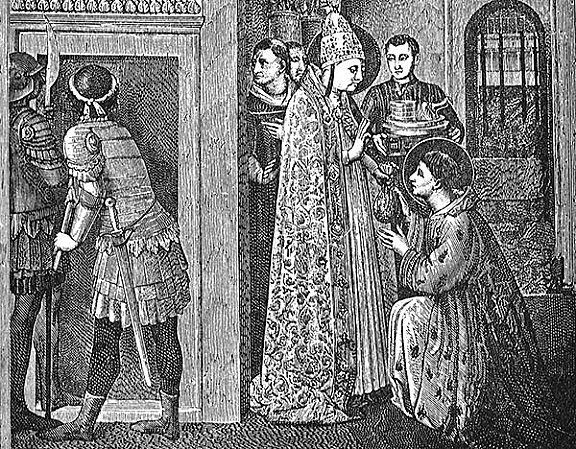 Pope Sixtus places treasure in the hands of Lawrence.

EMPEROR VALERIAN ordered the death of Christian leaders in Rome. An old story tells that the deacon Lawrence was one Christian brought before the Roman prefect (magistrate) in charge of carrying out the order. The prefect knew that, as a deacon, Lawrence had charge of church money. He promised Lawrence his freedom if he would hand over the church's wealth.

Lawrence agreed to bring the church's treasures to the prefect. “But it will take me a few days,” he said. “The church is very rich.”

Actually, Lawrence had distributed the Church's possessions to the poor. On the third day he appeared before the prefect. “Come out and see the wondrous riches of God,” he urged.

When the prefect emerged he saw not wagons full of gold, but a gathering of Rome’s lame, its blind, and its beggars. He demanded to know the meaning of the assemblage.  Lawrence replied that these poor people would some day have glorious bodies and live forever in Heaven. They were jars of clay in which were hidden the treasure of the Holy Spirit.

The prefect was furious. He was going to be the laughing stock of Rome. In revenge he determined that Lawrence must suffer a cruel, slow death. On this day, 10 August 258, the story goes, torturers dislocated Lawrence’s arms then fastened him to a grill where he slowly roasted to death. During his ordeal, he reportedly suggested his killers flip him over, remarking that he was “done” on one side. He was so calm despite his torment that onlookers were greatly impressed.

Within a century, Emperor Constantine and popes had erected memorials to Lawrence. A hundred years after his death, his martyrdom was still so well known that the famous Bishop Ambrose of Milan wrote about him. Rome’s Church of San Lorenzo is named for the martyr.