It Happened on JULY 9

Cruel Deaths for the Gorcum Martyrs 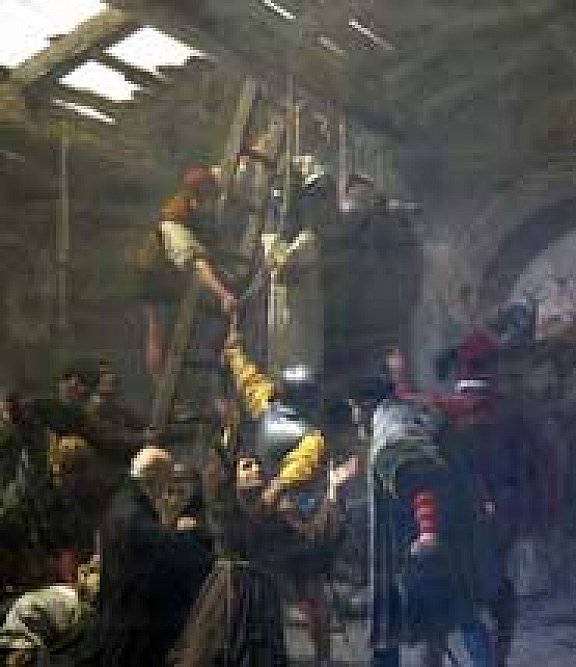 Painting by Cesare Fracassini depicts the handing of one of the Gorcum martyrs.

DURING THE RELIGIOUS WARS that followed the Reformation, both Catholics and Protestants perpetrated hideous atrocities. One such story was that of the Gorcum martyrs.

Catholic Spain had conquered the Netherlands and treated the Dutch and Belgians cruelly. Even Catholics themselves did not escape Spain’s harsh measures. Consequently, many Netherlanders became Protestants and resisted Spanish rule. When Dutch sailors known as the “Sea Beggars” captured Dordrecht from Spain, Protestants in nearby Gorcum notified these sailors that their town, too, was ripe for plucking. The Sea Beggars seized Gorcum on 26 June 1572. They assaulted a citadel in which Catholic believers—both lay and clergy--had holed up, and quickly breached the outer defenses.

The Sea Beggars promised the Catholics their lives if they would capitulate, requiring only that they hand over all their goods. However, they broke their promise. Although they freed most of the lay Catholics and all of the women after the goods were handed over, they held the priests. Subjecting them to mock executions and ridicule, the Sea Beggars tried to compel them to renounce the faith. Most held true. The Sea Beggars transferred their prisoners to Briel where the cruel treatment continued.

Protestants throughout the Netherlands called on the Sea Beggars to show mercy. William of Orange, leader of the Dutch resistance, sent an order commanding that priests and other religious leaders be left alone. This infuriated Lumaye, Baron de La Marck, the admiral of the Sea Beggars. He said that William of Orange was mistaken if he supposed de la Marck had shaken off Spain’s yoke only to bend his head to a Dutch equal.

However, the admiral felt the force of public pressure, and made his prisoners an offer: “You may all go free if only you will admit that the pope is in no way head of the church.” All twenty-one remaining prisoners rejected this suggestion.

Father Nicolas Pik had two brothers who persuaded the captors to release him. Pik was a timid man who fainted when cut, but he refused to abandon his fellow captives, saying that if he abandoned them, he would fall into hell. He implored them to say no more on the subject. “Let me rather go to heaven at once. Death does not frighten me,” he said.

The admiral was a heavy drinker. Inflamed by wine, he determined to show his captives who was boss. A little after midnight on this day, 9 July 1572, he ordered the Catholics hung. He sent John Omal, a renegade Catholic priest, to string them up. Omal stripped the priests naked and proceeded with the grisly work in a turf shed.

Thirty-eight-year-old Father Pik offered himself to the noose first, saying to his fellow martyrs, “I show you the ladder to heaven. Follow me like valiant soldiers of Jesus Christ.” Only two of the Catholics recanted; eighteen followed Pik to death. Because the legs and arms of the victims were not tied and the ropes were carelessly placed, their deaths were slow. Accounts of the martyrdom say that the soldiers mutilated the bodies. The next day, they flung them into trenches for burial.

Of the two who recanted, one was hung for theft a few months later. The other returned to the church.