It Happened on MAY 17 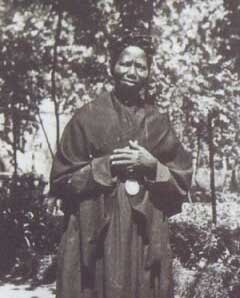 On this day, 17 May 1992, Pope John Paul II beatified Sister Josephine Margaret Fortunata, also known by the Arabic name Bakhita, or simply as “The Black Mother.” In an address the next day, the pope said, “Blessed Josephine Bakhita, in her humility and her total abandonment to God, teaches us not only to work and to pray, but above all to trust.” Her story was one of exceptional courage and suffering.

Born in the Sudan sometime around 1869, she was stolen into slavery when about seven years old (although she thought she might have been nine). Her new owners forced her with fierce threats to learn a new name, Bakhita, “the lucky one.” So traumatized was she that she was never able afterward to recall her birth name.

Bakhita was sold in the slave market. She and a friend managed to escape, but had no idea where to go and soon were enslaved by another man. He in turn sold Bakhita to a cruel Turkish family who beat her on an almost daily basis, and who forced her to endure a painful form of scarification made with many knife slits into which salt was rubbed. Taken to Khartoum, she was sold to the Italian Consul, Callisto Legnani. In his household she received her first kind treatment as a slave.

When Legani left to return to Italy, Bakhita begged to be allowed to accompany him. Finally, reluctantly, he agreed. In Italy, the wife of his friend Michieli pressured Legani to leave Bakhita with her. Bakhita became her personal servant and the babysitter of the Michielis’ new-born daughter, Alice, nicknamed Mimmina. Mrs. Michieli had to leave Italy for a short time on business and decided to leave her daughter with Bakhita in a home of the Canossian Sisters of the Institute of the Catechumens in Venice. To gain entrance, Bakhita had to assert she was seeking to be catechized for baptism, to which she readily assented.

As a child seeing the sun, the moon and the stars, she had asked herself, “Who could be the Master of these beautiful things?” adding, “And I felt a great desire to see him, to know Him and to pay Him homage.” Her inbuilt tendency to faith soon led her to a deep conversion. When Mrs. Michieli returned, Bakhita refused to leave the convent. The sisters, not wanting a fuss, tried to get her to go, but Bakhita said to leave would cost her her soul: the Michielis were fashionable atheists.

The Italian government got involved and ruled that, because slavery was illegal in Italy, Bakhita was free to make her own decision. Although it broke her heart to part with Mimmina, Bakhita was now both spiritually and legally free.

Eventually, she joined the Canossian Sisters. To do so, she had to undergo an examination of her faith. Her examiner was Giuseppe Sarto, soon to became Pope Pius X. Bakhita remained with the Canossian Sisters the rest of her life, gaining renown for her humility and holiness.

Eventually she was known throughout Italy, because her mother superior required her to dictate her memoirs, which were printed as A Marvellous Story. These made her famous. Many people came to the convent to see her. Her superior ordered her to go on a fundraising tour with another sister, which she did reluctantly, because she spoke in public only with difficulty. She said little, allowing her partner to give the main presentation. But when people deplored the cruel slave owners, she replied, “I pray for them a lot, that Our Lord who has been so very good and generous to me will be the same with them, and bring them all to conversion and salvation.”

She died in 1947 in her late seventies, having become increasingly broken in body, and finally wheelchair bound.  In 2001, Pope John Paul II canonized her.