It Happened on APRIL 9 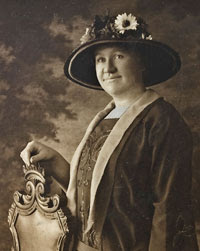 Johanna Veenstra felt a nagging pain. She consulted a mission doctor who diagnosed appendicitis. The operation seemed successful, but shortly afterward she felt herself slipping. As friends prayed at her bedside, she declared the Lord was her portion. “I’m not sorry. It is all in the will of God. I couldn’t have chosen anything better than to go like this. I’m all unworthy, only a sinner saved by grace. Thrown into the presence of the Lord Jesus, Victor over death!” She was not quite thirty-nine when she died on this day, Palm Sunday, 9 April, 1933.

Veenstra’s father had been a minister. When he died young, she was angry and rebellious. At fifteen she secured a typist job in New York and reveled in her earnings, buying dresses and jewelry. One afternoon, she received a telephone call from her minister, inviting her to his home. There he spoke seriously of her soul. For the better part of a year, she struggled under a sense of guilt, praying often in terror of death and hell. She did not find peace until she submitted herself to God’s will.

She began to work with the Star of Hope Mission in Paterson. Gradually she was drawn further into Christian work and attended a school to train for missions. Sent as a delegate to a mission conference in Wisconsin in 1915, she heard Dr. Karl Kumm speak of the desperate need of Africa. Moved, she spent three days in prayer.

Believing God was calling her, Veenstra determined to become a missionary to Nigeria. Because the Christian Reformed Church, of which she was a member, did not have a foreign mission agency, she applied to the Sudan United Mission.

As she was not yet twenty-five, the minimum age to join, Veenstra was put on hold. She devoted the time to learning midwifery and to reading up on Nigeria. In 1921 she finally reached Lupwe, the station where she would carry on her work. By then she could converse fluently and preach in Hausa, one of the major languages of Nigeria.

Because no male missionaries were at hand, she soon found herself directing the work, which she carried on with vigor. In addition to spiritual instruction, she ran a clinic at which she treated many ailments. Her love, hard work, and firm adherence to biblical standards brought many people of the cannibalistic Kuteb tribe to Christ. A colleague said, “She was GREAT, very humble, very human. If she was ever irritated or off-hand with me, through tiredness, she would always come in the evening and say, ‘Forgive me for being cross today.’ Prayer cemented us. Morning and night we prayed over everything.”

Although Veenstra firmly believed the African church should take over its own work as soon as possible—and created a boarding school to prepare such leaders—leadership developed slowly. Meanwhile she pleaded with her denomination to establish a mission work. Synod after synod of the Christian Reformed Church stonewalled the proposition. Not until seven years after her death did the Christian Reformed Church assume the mission work in Sudan. This marked the beginning of its overseas work.

In 2008, seventy-five years after Johanna’s death, four members of the Kuteb tribe made a trip to her grave near Jos, Nigeria. Out of respect for their “spiritual mother” they came to clean it up because it had long suffered neglect. Disturbed to find that her plaque was missing, they made a new one with cement and water. But the Reformed Christians of Nigeria were a greater memorial to her life than any headstone could ever be: there are more Nigerians in Reformed Churches than in the United States denomination that birthed them. A seminary at Donga, one of Veenstra’s preaching sites, is named for her.