It Happened on MARCH 9 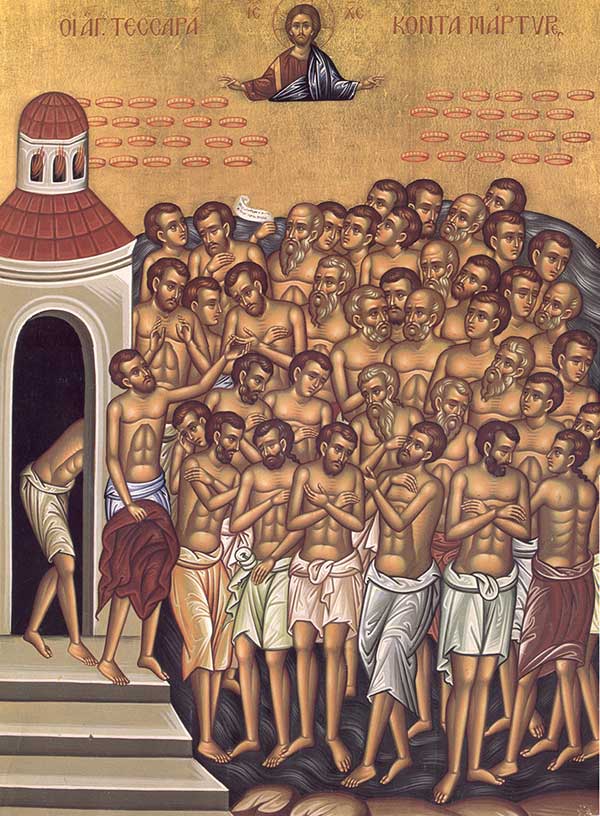 [Icon of the forty martyrs]

“Consider—you alone of Caesar’s troops defy him! Think of the disgrace you bring upon your legion. How can you do it?” Governor Agricola was speaking to forty soldiers in the 12th Legion of the Roman army who refused to offer sacrifice to the emperor while they were stationed near Sebaste in modern-day Turkey.

“To disgrace the name of our Lord Jesus Christ is more terrible still,” replied one of the soldiers.

The governor became exasperated. “Give up this stubborn folly. You have no lord but Caesar! In his name, I promise promotion to the first of you who steps forward and does his duty.”

When that lure did not break their ranks he increased the pressure. “You persist in your rebellion? Then prepare for torture, prison, death!”

The soldiers stood firm. “Nothing you can offer us would replace what we would lose in the next world. As for your threats—we’ve learned to deny our bodies where the welfare of our souls is at stake.”

Agricola ordered them flogged. Guards dragged the men out into the cold where they were stripped and tied to posts. Whips with hooks of iron tore the men’s sides. Unbelievably not one of the forty surrendered. “Chain them in my dungeons!” roared Agricola. He referred their case to Lysias, commander of the 12th Legion, whose coming was soon expected. When Lysias arrived he threatened a sharp penalty if the soldiers continued to disobey.

On this day, 9 March 320, the men remained respectfully defiant. A new torture occurred to Agricola. Nearby was a frozen pond. The March air was sharp. “You will stand naked on the ice until you agree to sacrifice to the gods,” he said.

The rebel soldiers tore off their own clothes and ran toward the pond in the freezing air. “We are soldiers of the Lord and fear no hardship,” shouted one. “What is our death but entrance into eternal life?” Striking up a song, they marched onto the frozen pond. Baffled, Agricola posted guards. He had baths of warm water heated as an incentive to the forty to come off the pond.

As dark closed in, the forty prayed, “Lord, there are forty of us engaged in this battle; grant that forty may be crowned and not one be missing from this sacred number.” It appeared their prayer was doomed to disappointment, however. Babbling, one of the forty crawled away from the ice. Guards helped him into a bath but the heat proved too much of a shock to his frozen system. He immediately went into convulsions and died.

However, one of the guards had seen a vision of angels with crowns hovering over the pond. Impressed by the bravery of the remaining thirty-nine, he shucked off his clothes and ran onto the ice. The martyrs numbered forty again!

When the sun rose, Agricola was told that the forty were dead. He ordered the bodies burned and their ashes dumped into a nearby river so the bones could not be collected and venerated. When the guards began stacking the stiff corpses onto a wagon, they discovered that Melito, the youngest of the soldiers, was still alive.

Melito was a local boy. The soldiers recognized his mom nearby. “Listen, Mother, take your boy home, save his life if you can. We’ll look the other way,” they said.

“What kind of talk is that?” scolded the woman. “Would you cheat him of his crown? I’ll never let that happen!” As the wagon began to roll away, she hoisted her son in with the others.

Ephrem the Syrian, who was a teenager when the forty were martyred, wrote an account. Basil the Great and Gregory of Nyssa, near-contemporaries, also produced accounts. Attempts to keep the forty’s relics from veneration were unsuccessful. Bits of bone washed up at a bend in the river. Faithful Christians gathered fragments and deposited them at churches dedicated to the forty.