It Happened on FEBRUARY 6

PHOTIUS WAS AT THE HEART OF CONFLICT WITH ROME 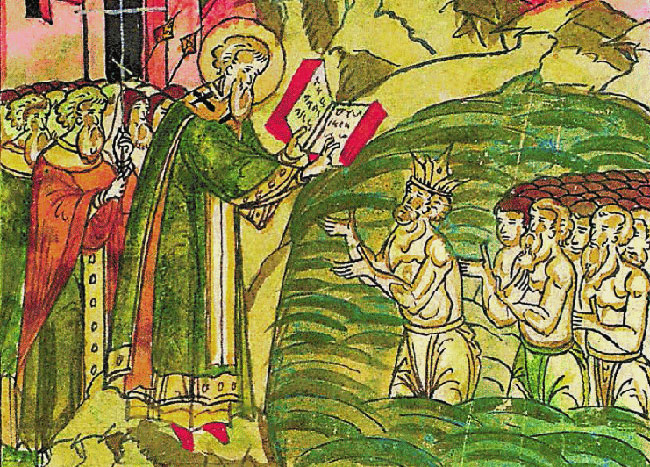 [Photius baptizing the King of Bulgaria]

Photius was twice patriarch of Constantinople. Two times he rose to the position of prominence and two times fell from it. His ups and downs mirrored the politics of the day.

He had a preliminary taste of exile as a child: his parents were ordered out of Constantinople because they accepted the use of icons. After a political party came to power that endorsed icons, Photius was able to return to the imperial city. He became a notable scholar and professor at the university in Constantinople. He was working for the civil service and was not even a priest when Patriarch Ignatius offended Bardas, the real power behind Constantinople’s throne. Ignatius refused Communion to Bardas for living in incest with his widowed daughter-in-law. Under pressure, Ignatius resigned. At the recommendation of courtiers, Bardas chose Photius to replace Ignatius.

Church leaders rushed Photius through all the ecclesiastical orders during the first six days of 858 so he would meet the technical requirements for patriarch. Ignatius’s adherents appealed to Rome for justice. Photius himself made representations to Rome. (Rome would later claim Photius made false promises.) Pope Nicholas I sent legates to investigate the deposition of Ignatius. The legates accepted Photius as the legitimate occupant of the important see.

However, Photius would not cooperate with Rome. Nicholas and Photius tangled over who should exercise authority in Bulgaria and other regions. Consequently Nicholas accused the legates of accepting bribes, punished them, and rejected Photius. Photius wrote an open letter to the bishops of the East denouncing theological and liturgical changes made in the West. In 867 he headed a council that excommunicated Nicholas. This period of mutual non-acceptance by east and west is known as the Photian Schism. But in 867 Basil the Macedonian assassinated Emperor Michael III, seizing power. When Photius protested, Basil exiled him and restored Ignatius. However, nine years later, the imperial court invited Photius back to Constantinople as a tutor.

When Ignatius was dying in c. 877, he urged the reappointment of Photius. The court agreed and Photius resumed the patriarchy. Pope John VIII, in need of naval assistance from Constantinople, also endorsed the appointment. In 886, the rise of a new emperor led Photius to resign; whether this was voluntary or forced is not known. He went into exile.

Assessments of Photius vary wildly. While all sides acknowledge his deep learning, Latins denounce him as a monster because of his resistance to Rome, whereas the Eastern Orthodox Church considers him one of its greatest defenders of truth. Among Balkan peoples he is honored for sending Cyril and Methodius to evangelize them. Photius’s clashes with Rome prefigured the later divorce of the eastern and western churches in the Great Schism.

Photius’s two best-known works were the Myriobiblion and “Mystagogy of the Holy Spirit.” The first was a summary of hundreds of books he had read, often including excerpts of works now lost to us. In the “Mystagogy,” however, he denounced and refuted the Roman Catholic church’s addition of the filoque clause to the Nicene Creed. Photius denied that the Holy Spirit proceeds from both Father and Son. Even if He does, he said, such a major change in doctrine should have been argued and decided by a council of the entire church, not introduced unilaterally by the West. Pope John VIII accepted the findings of the Eighth Ecumenical Council against the filoque clause.

Surprisingly for such a prominent figure, the date of Photius’s death was not recorded. A date often suggested is today, 6 February 897. While the day is fairly certain, the year is disputed.