It Happened on FEBRUARY 27 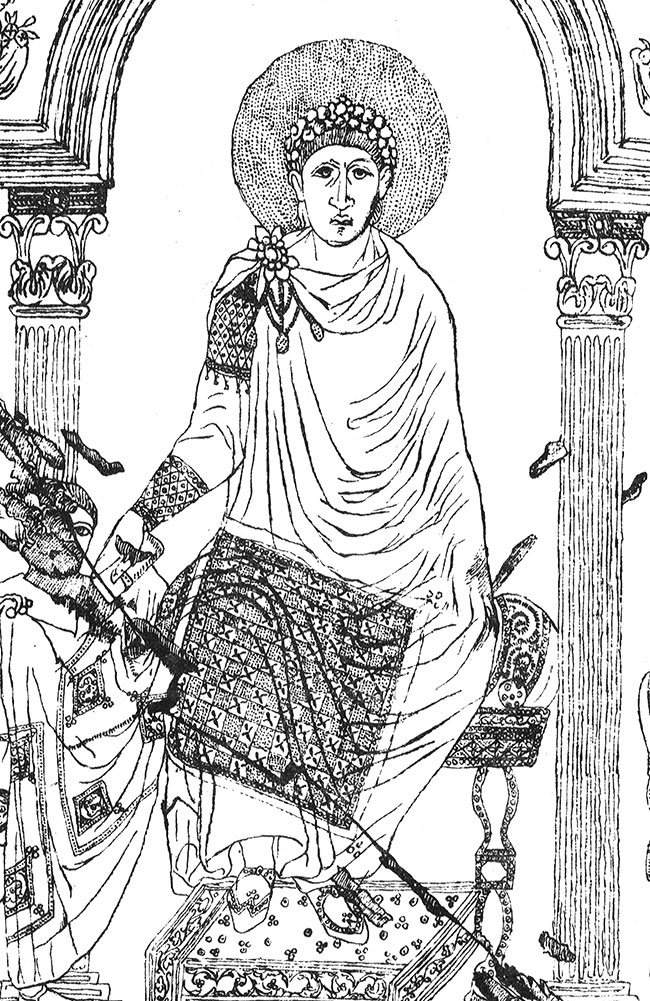 [Above: Theodosius.—Thomas Hodgkin, The Dynasty of Theodosius; or Eighty years’ Struggle with the Barbarians. Oxford: Clarendon, 1889.]

It is our desire that all the various nations which are subject to our Clemency and Moderation should continue to profess that religion which was delivered to the Romans by the divine Apostle Peter. . . .

On this day, 27 February 380 (or the 28th), Emperor Theodosius decreed that one and only one version of Christianity was acceptable—the version held by Damasus, bishop of Rome and Peter, Bishop of Alexandria. Theodosius’s edict proceeded to define what would be considered true Christianity.

According to the apostolic teaching and the doctrine of the Gospel, let us believe in the one deity of the Father, the Son and the Holy Spirit in equal majesty and in a holy Trinity. We authorize the followers of this law to assume the title of Catholic Christians. . . .

Arians and other adherents to false doctrines attacked the full divinity of Christ. This is what Theodosius opposed. Anyone who deviated from trinitarian Christianity was a heretic and subject to penalties:

... but as for the others, since in our judgment they are foolish madmen, we decree that they shall be branded with the ignominious name of heretics and shall not presume to give to their conventicles the name of churches. They will suffer in the first place the chastisement of the divine condemnation and in the second the punishment of our authority that in accordance with the will of Heaven we shall decide to inflict.

In actuality, Theodosius’s bark was worse than his bite. He did not persecute individual heretics, although he confiscated the church buildings of heretical groups.

Theodosius was born in 347 into a Spanish Christian family. His father was a successful Roman general and young Theodosius assisted as an aide in his wars. He demonstrated leadership when he led an army that defeated the Sarmatians in battle in 374. When his father fell a victim to court intrigues, Theodosius withdrew to his family estates, but Emperor Gratian summoned him to court in 378. Theodosius quickly proved his military ability with another defeat of the Sarmatians. In January 379, Gratian named him co-emperor.

Operating primarily from Thessalonica, Theodosius saw that he could not expel the Goths, and instead brought them under Roman sovereignty. In an attempt to settle religious disputes, he defined the nature of Catholicism and called the Council of Constantinople which ratified his statement. He succeeded Gratian as emperor, and fought various usurpers to control the entire Roman Empire. He was the last man to unite the east and west empires under one head.

One of the most famous events of his life was a massacre at Thessalonica in 390, after one of his generals was assassinated there. Theodosius was in Milan at the time, and Milan’s renowned bishop, Ambrose, required him to do penance as a result of the massacre before he could be readmitted to Communion. Theodosius returned to the East soon afterward, but the rise of new rivals and an attempt to restore paganism in the West forced him to march again. He died at Milan in 395 just a few months after a victory at Frigidus secured his claim to be sole emperor. He was not yet fifty years old.

The empire split between his two sons immediately after his death. His son Arcadius and grandson Theodosius II, reigning over the Eastern Empire, also oversaw church councils, but his granddaughter Pulcheria proved to be the most capable of his offspring. As regent to her younger brother Theodosius II and then as one of his counselors, she defended Christian doctrine against monophysites and Nestorians. Becoming empress in 450, she ruled with her husband Marcian and influenced the Council of Chalcedon that issued authoritative declarations on the nature of Christ.