It Happened on FEBRUARY 2

ELIZA GEORGE DIDN'T HAVE IT EASY, BUT PERSISTED IN GOD'S WORK 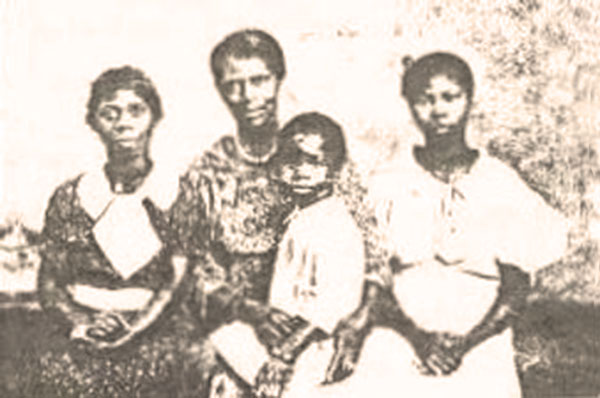 [Eliza Davis George with three of her African children]

When Eliza Davis George was in her late sixties, the Baptist mission that was sponsoring her work in Liberia forcibly retired her. She consulted the Lord and was sure he wasn’t ready for her to retire. And so Eliza George convinced admirers to set up clubs to support her and returned to Sinoe County, Liberia. Despite a hideous sore on one leg that never healed, she continued to trek from village to village into her nineties. With characteristic good humor, she described walking as traveling by “ankle express.”

Eliza’s work in Liberia can be said to have begun in 1911. Hardworking and determined, she had become a teacher at a Christian college in Texas. On this day, 2 February 1911, a mission-minded speaker challenged the school in chapel. Eliza had a vision of Africans passing before the judgment seat of Christ, weeping and moaning, “But no one ever told us You died for us.” She immediately declared her intention to go to Africa. Faculty members attempted to dissuade her: plenty of work remained to do in America. One even told her “You don’t have the money, and we ministers stand between you and the people to keep you from getting the money!”

But Eliza was nothing if not stubborn where the Lord’s will was concerned. It would take her two years to convince the college to release her from her job and to convince a Baptist mission to support her. In a moving appeal, she even won over her chief opponent. Finally in 1913 she sailed for Liberia, underfunded but determined to win souls.

In the colony, well-wishers tried to convince her to settle in the capital, Monrovia. She insisted on going where need was greater, two hundred miles away, although conditions would be far more difficult for her. With fellow missionary Susie Taylor, she founded an industrial school to teach practical skills as well as reading, writing, and arithmetic. Within two years, she had over fifty students and had seen over one thousand African villagers come to Christ. Wracked by continual fever, Taylor returned to the United States, leaving Eliza alone.

During World War I, Eliza suffered from a lack of funding and supplies. Often she and her students were reduced to scavenging for wild growths they could scarcely gag down. When her mission disbanded, she was able to remain in Africa only by marrying G. Thompson George, a missionary doctor. He proved to be an alcoholic. When Eliza found it repugnant to have marital intimacy with him, he turned to other women. Nonetheless, he enabled her to continue her gospel work and relieved her of many managerial demands during their twenty-one-year marriage until he died in 1939.

In those early decades, every time the pair started a work, they had to leave it. When they returned, the buildings would be eaten by termites or reclaimed by jungle. However, the seeds of faith planted in Eliza’s students persisted, and eventually her young people became preachers, teachers, and missionaries, assistants in many endeavors.

In 1940, desperate for the money to pay her bills, she learned that $200 had been mistakenly sent to Monrovia. With two young students, she trekked the two hundred miles to Monrovia, following the hot sands of Liberia’s coast. By the time she arrived exhausted at her destination, her mind was sometimes wandering. She learned that the money had been returned to the United States. No course was open to her but to turn around and begin the long trek back. By diligent prayer she got through those difficult days.

She was over seventy when she built her last station on land considered cursed by the local tribe. It proved to be her most successful and lasting work.

One of the greatest miracles of her life happened when she was in her seventies. A Liberian doctor told her she had to return the United States at once or lose her sight. She prayed and checked the post office. A sum sufficient for travel had arrived. Although the passenger ship had left two days earlier, a cargo vessel agreed to take her. She arrived in time and her surgery was successful.

New missionaries came to Africa to replace her when she was in her nineties. They expected to find her brittle and overbearing. Instead they found a woman full of good humor and deep spirituality, still fasting and praying as she faced needs.