It Happened on NOVEMBER 17 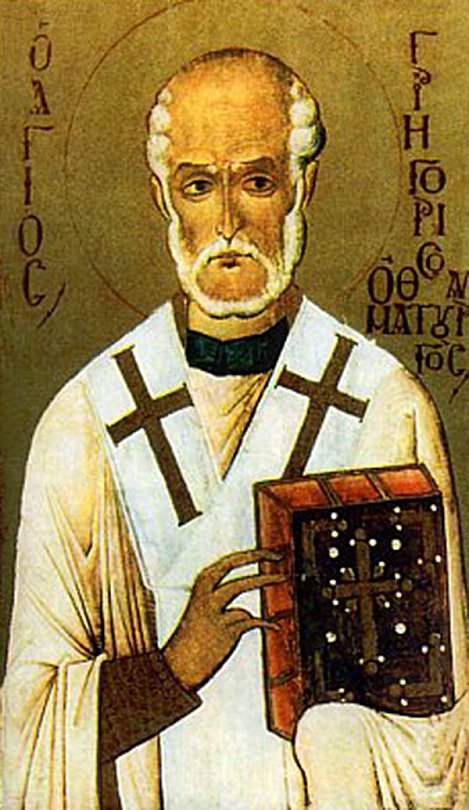 FOR MANY PEOPLE of the ancient world, the only date we know in their lives is the date of their death. With Gregory the Wonder Worker, we are not even sure of that. Despite his fame and the transformation of Neocaesarea while he worked as bishop there, we have only a traditional date for his death, which is supposed to have taken place on this day, 17 November 270.

Gregory was born into a prosperous pagan home around 212 and his parents named him Theodore—Gift of God. (He changed his name after becoming a Christian.) They wanted him to become a lawyer. Gregory and his brother Athenodorus planned to attend a famous law school in Lebanon. On the way, they first had to escort their sister to rejoin her husband, who was a government official assigned to Caesarea in Palestine.

While in Caesarea, they made a life-changing decision. The famous theologian Origen was newly arrived from Egypt. They decided to check him out and “were held spell-bound by his disquisitions on the true aims of life.” Impressed with Origen’s oratorical skill, his virtuous life, and brilliance, they became his pupils. Origen soon converted them to Christianity, and for at least five years they studied theology and philosophy with him. On departing, Gregory made a lengthy and pompous oration of thanks to Origen.

When Gregory headed home, he still planned to practice oratory, but also wanted to write a book proving the truth of Christianity. As far as we know, he never followed through on the second project. Nor did he become a lawyer. Instead, he became bishop. According to tradition, there were just seventeen Christians in Neoceasarea when Gregory arrived. This little group persuaded him to lead them. At the time, Neocaesarea was a wicked, idolatrous province. His methods for reaching it with the gospel resembled modern ones. He arranged games on martyrs’ days and tended the sick. God granted him such success as a healer that many people came to Christ. His cures were considered miracles and from the earliest times he was known as Gregory Thaumaturgus, “Wonder Worker.”

Gregory expected Christianity to triumph through the sheer joy of its message. Instead of pagan cynicism and despair, it offered hope:

And if any one does not believe that death is abolished, that Hades is trodden under foot, that its chains are broken, that the tyrant is bound, let him look on the martyrs deporting themselves in the presence of death, and taking up the jubilant strain of the victory of Christ. O the marvel! Since the hour when Christ despoiled Hades, men have danced in triumph over death.

The transformation in Neocaesarea was astonishing. If there were only seventeen Christians when Gregory came, at his death it was said there remained only seventeen pagans.

For more about Gregory the Wonderworker and other illustrious pioneers of the Orthodox Church, watch History of Orthodox Christianity.