“I believe in God the Father Almighty.” Pirmin (flourished eighth century), in the Writings of Abbot Pirminius. 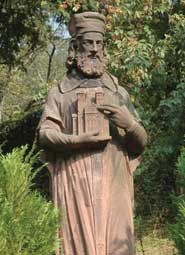 Pirmin Statue at the Murbach Abbey

I believe in God the Father

Pirmin is a missionary-monk who has come from the western side of Europe to found a monastery at Reichenau on the Lake of Constance. It is but the first of many such establishments he will found in Switzerland, Alsace, Bavaria, and elsewhere in Frankish and Germanic lands.

Like many missionaries before and after him, he realizes that his converts need a manual to help them govern their lives. And so he prepares a short book. Like almost all works of the time in the western church, it is compiled in Latin. But his Latin is of poor quality as even the title of his work shows. He calls it Dicta abbatis Pirminii de singulis libris canonicis scarapsus, and in future centuries, scholars will debate how to translate the unknown word scarapsus. Still, the book consists of useful excerpts and guidelines for newly baptized believers with many Scripture citations. Pirmin attempts to teach new believers why man was created—he thinks it was to fill a gap left by fallen angels; how Satan was vanquished—by Christ’s humility; and the vocation of the Christian—to follow Christ. He lists eight deadly sins: lust, gluttony, fornication, wrath, despair, recklessness, vainglory, and pride—a list similar but not identical to the Roman church’s later Seven Deadly Sins.

If this were all he taught, his book might be completely forgotten by future generations. What makes his work special is a little gem that found its way in. Pirmin gives the first complete copy of the Latin version of the Apostles' Creed as it will be used in later centuries.

“I believe in God the Father Almighty Maker of Heaven and Earth; and in Jesus Christ His only (begotten) Son our Lord; who was conceived by the Holy Ghost, born of the Virgin Mary; suffered under Pontius Pilate, was crucified, dead, and buried; He descended into hell; the third day he rose from the dead; He ascended into heaven; and sits at the right hand of God the Father Almighty; from there he shall come to judge the quick [living] and the dead. I believe in the Holy Ghost; the holy catholic [universal] Church; the communion of saints; the forgiveness of sins; the resurrection of the body; and the life everlasting. Amen.”

Following a tradition common in his day, Pirmin assigns authorship of each part of the creed to a different apostle. Allegedly, the twelve gathered together before leaving Jerusalem to fulfill the Great Commission, and each contributed a piece of the creed to ensure that the faith they taught would remain uncorrupted no matter where it traveled. Under this scenario, Peter provided the segment on the Father, John on the Son, James on the Virgin birth, and so forth.

The creed is already very old in Pirmin’s day. The Acts of the Apostles shows that Philip had his Ethiopian convert confess Christ as the Son of God. Paul has written about a “form of doctrine” which may well have been a creed. Early Christian writers have also referred to the “symbol” (as they called the creed), but each has recorded it differently, perhaps paraphrasing or amplifying it. The creeds of the early church fathers differ from Pirmin’s in their details. One that was repeated at Nicea, for example, declares Christ “the Word of God; God of God, Light of light, Life of life.” Tertullian has given three versions, which amplify what is said of Jesus, as in this segment: “He rose the third day, was caught up into heaven, set at the right hand of the Father, sent the vicarious power of his Holy Spirit to govern believers and will come with glory to take the good into life eternal, and condemn the wicked to perpetual fire.”

The Latin version of the creed as recorded by Pirmin will remain the accepted version in western countries, and it will be translated into all European languages.