Why did Christ sigh? 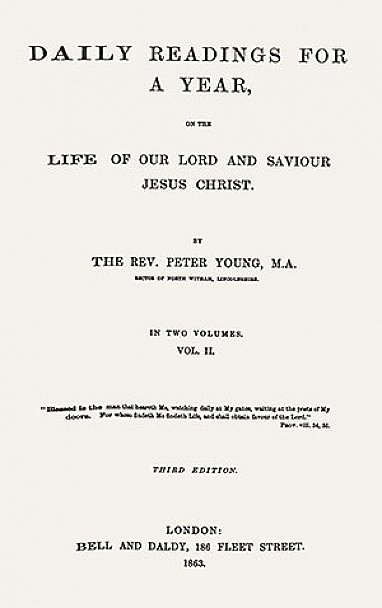 Title page of Young’s Daily Readings for a Year

There is one peculiar circumstance [in Mark 7:31-37] which deserves to be particularly noticed, namely, how in the very act of healing the man our Lord sighed, as if in some way it suggested a thought of sorrow.

If we may ask it with reverence, “Why was this?” Why did Christ sigh, seeing that at that very moment he was about to give him relief, and make him capable of enjoyments from which he had hitherto been debarred? No doubt it was partly a feeling of compassion for the sufferings of men which caused our Lord to sigh, when he beheld his piteous condition. But there was, at the same time, most likely, another and a deeper feeling. We may well suppose that our Lord sighed, because he knew, not only the inestimable value of the gifts which he was about to bestow, and the heavy judgments which await those who misuse them and turn them against the giver, but also that this very man would not make a right use of his newly-acquired powers of hearing and of speech: and he certainly knew that if he misused them, it would have been better for him never to have been able to hear or speak at all.

If this be a true account of our blessed Savior’s sorrow on this occasion, it is surely very much to be considered by us, who have the full use of our ears and tongues: for it may be that he is even now grieving over the way in which we employ them. He may see that we allow ourselves to take delight in hearing what we should not hear, and in saying what we should not say: and if so, there is reason to fear that it would be better for us not to have the power of hearing or speaking at all, than that we should thus make them the occasions of sin: better, that is, that we should be deaf and dumb all our lives, than that we should place our souls in danger of everlasting ruin by the way in which we use our ears and our tongues.

Each day of Peter Young’s readings included a three- to four-page meditation on selected words of Christ or on an incident from the life of Christ. Young (who lived in the 19th century) was Rector of North Witham in Lincolnshire.

Peter Young. Daily Readings for a Year, on the Life of Our Lord and Saviour Jesus Christ. London, n.d.