The time is short 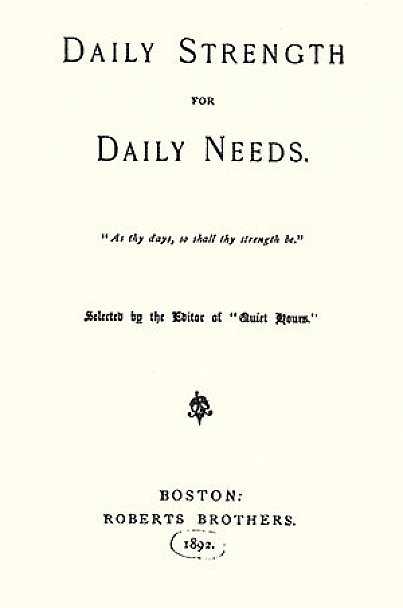 I sometimes feel the thread of life is slender,
And soon with me the labor will be wrought;
Then grows my heart to other hearts more tender.
The time is short.

Oh, my dear friends, you who are letting miserable misunderstandings run on from year to year, meaning to clear them up some day; you who are keeping wretched quarrels alive because you cannot quite make up your mind that now is the day to sacrifice your pride and kill them; you who are passing men sullenly upon the street, not speaking to them out of some silly spite, and yet knowing that it would fill you with shame and remorse if you heard that one of those men were dead tomorrow morning; you who are letting your neighbor starve till you hear that he is dying of starvation; or letting your friend’s heart ache for a word of appreciation or sympathy which you mean to give him some day, —if you only could know and see and feel, all of a sudden, that “the time is short,” how it would break the spell! How you would go instantly and do the thing which you might never have another chance to do.

Dinah Mulock Craik (1826-1887) was an English author of several serious novels, including John Halifax, Gentleman and A Life for a Life, as well as the children’s fantasy The Little Lame Prince. She also wrote poetry. It is as the author of the Christmas carol “O Little Town of Bethlehem” that Phillips Brooks (1835–1893) is usually now remembered. However, he was also an eloquent champion of the abolition of slavery in the United States and a well-known and passionate moral reformer. Mary Wilder Tileston (19th century) included today’s excerpts in Daily Strength for Daily Needs, one of several devotional books she compiled.