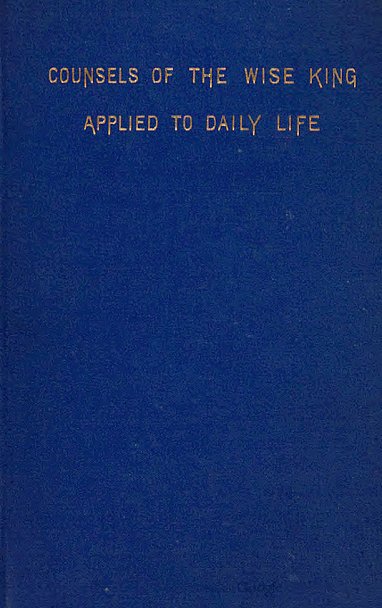 Cover of Counsels of the Wise King

Rescue those who are being taken away to death; hold back those who are stumbling to the slaughter. If you say, “Behold, we did not know this,” does not he who weighs the heart perceive it? Does not he who keeps watch over your soul know it, and will he not repay man according to his work? — Proverbs 24:11, 12 (ESV).

Interpretation — The imperative mood is here used, “Deliver them who are captured for death.” The admonition would seem to be addressed in the first instance to men whose official rank entitled them in some measure to interfere with, or at least protest against, an unjust sentence, such as in the East, through reckless haste and passion, was not seldom pronounced and followed by immediate execution. But it also reminds all of the duty of showing sympathy and compassion towards the fallen, and using what means they may to save them from unmerited or over-severe treatment. The motive being that God, who is man’s keeper, requires man to be his brother’s keeper. And if this be true as regards bodily death, much more of that which is spiritual and eternal.

Illustrations — The good Samaritan by timely succor earned (like Job) “the blessing of him who was ready to perish” …. Of all the Apostles, none more felt himself his brother’s keeper than St. Barnabas. Witness his timely relief (at the cost of his fortune) of the earliest Christian converts, who had risked the loss of their livelihoods. Witness his generous defense of Saul of Tarsus, at a time when to side with such a neophyte was to expose himself to cruel suspicion. Witness the shield he threw over young John Mark, whose tottering steps might else have led to downfall. Witness his zeal for souls “captured for death” by Satan (Acts 14:14), and for others needing exhortation and sympathy (Acts 11:23), and see in how true a sense Barnabas was his brother’s keeper.

Application — The truth here asserted is an answer to Cain’s insolent challenge to the Almighty. I am my brother’s keeper, inasmuch as God deigns to be mine, and demands this recognition of his loving guardianship at my hands. “Love one another as I have loved you,” says our great Exemplar, and inasmuch as “he died for all,” this principle applies to all. Ignorance which is more than half willful will not be reckoned for innocence. He that keeps my soul (my life, both physical and spiritual) will one day ask what I have done for the keeping of others, and will render to me according to my works.

Let me aim to be like St. Barnabas, a “good” or “kind” man, to be imbued with that “goodness” or “kindness” which is one of the fruits of the Spirit (Galatians 5:22).

While vicar of St. James’s Parish, Tunbridge Wells, Rev. Christopher Ridley Pearson wrote on Solomon’s proverbs, selecting one for each day of the year to spotlight its truths and suggest applications. A member of the Anglo-Catholic movement in the Church of England, he was known for his outreach to the lower classes and was controversial for restoring some Catholic forms of worship to his parish.