Devotional Classic of MAY 8

Christ Is Our Master 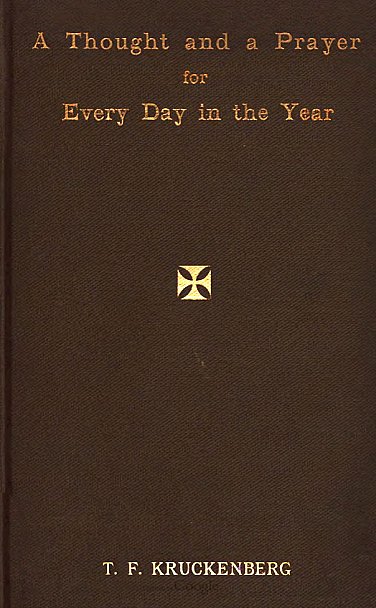 Think of God, and work as in His sight—a life of devotion, and of quiet activity and industry cannot go unblest. Upon the devout worker will come God’s gift of peace. The Christian’s life ought to be, like the life of Christ, full of inward peace—the Christian’s prayers ought to be, like the prayers of Christ, full of calm and repose.— Grant me, Lord, to live as in Thy presence—a life of prayer and active service. —T. F. Kruckenberg.

Christ Jesus, be my Master, and may I be your willing servant. Grant that I may not serve the world, self, and Satan, but have grace to serve you faithfully, fully, and boldly all the days of my life. May I take an increasing delight in your happy service. Incline your ear to me and hear me. Amen. —Henry Law Harkness.

T. F. Kruckenburg (19th century) was Vicar of Grewelthorpe, a village in the north of Yorkshire and author of A Thought and a Prayer for Every Day in the Year. In 1878, Rev. Henry Law Harkness, the Vicar of Barrow in Worcestershire, issued the second edition of his Daily Prayer Union. It provided a short but thoughtful prayer for each day of the year. The Prayer Union was also the name of an organization Harkness led that was devoted to encouraging its members to participate in daily prayer. The book was not intended to replace personal prayer, but its author hoped “that the daily prayer should be in addition to your ordinary prayers, and a help to your devotions.” Their two devotionals were short and meshed well with each other, so we combined them.

T. F. Kruckenburg. A Thought and a Prayer for Every Day in the Year. London: Skeffington and Son, 1885.
Henry Law Harkness. Daily Prayer Union. London: Nisbet and Co., 1878.