Meditation on the Transfiguration 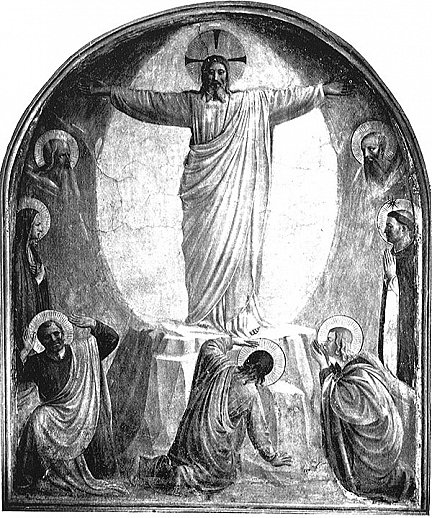 First Point.— Go up in spirit to Mount Thabor in the company of Christ and of His beloved disciples, and contemplate what passes there.… a voice is heard from the Father, and the hearts of the disciples are inundated with immense delight. … “This is my beloved Son, in whom I am well pleased,” … [R]ejoice at His joy, and congratulate Him a thousand times on His glory.

Second Point.— Consider the recompense that God has prepared for those who serve Him, and how great it must be, since St. Peter, with the one glimpse of it . . . was disgusted with all that the world possesses, and wished to leave it all. …

Third Point.— Consider the conversation that took place on that mountain, and in the midst of that glory, namely, on the Passion and death that Christ was to suffer at Jerusalem....beg of Him grace to meditate on it, and never to dismiss it from thy mind, and to delight in suffering for His love, as He rejoiced to suffer for thee.

Fourth Point.— Consider how the Evangelist says that the disciples, hearing the voice of the Father, were afraid and fell to the ground…. Reflect,then, that if a voice so sweet and mild caused them such great fear, what effect will be produced on the wicked when they hear that awful and most terrible voice condemning them to eternal torments!

Alonso dé Andrade (seventeenth century) was a Spanish member of the Society of Jesus (Jesuits) and an inquisitor.

Alonso dé Andrade. Daily Meditations on the Mysteries of Our Holy Faith and on the Lives of Our Lord Jesus Christ and of the Saints. London: Burns & Oats, 1878.