Jesus was estimated lower than his servant 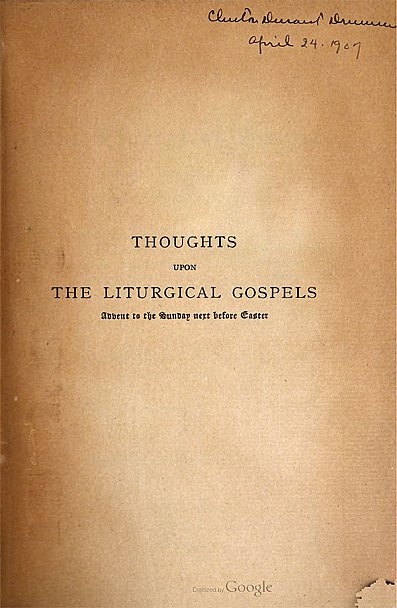 Title page of Ghoulburn’s Thoughts upon the Liturgical Gospels

The Jews sent priests and Levites from Jerusalem to ask [John the Baptist], “Who are you?”—John 1:19 (ESV).

The great mass of the Jewish people: “all men counted John that he was a prophet indeed” (Mark 11:32 KJV). The announcement of his birth by an angel to a priest when ministering in the temple, the miraculous dumbness inflicted upon that priest, and the equally miraculous removal of that dumbness at the time of the child’s circumcision (Luke 1); all this, coupled with his ascetic way of life, which was so much in accordance with popular notions of sanctity, gave him evident claims to be regarded as a prophet; and, however nettled the Pharisees and Sadducees might be by his plain dealing with them, when they offered themselves for his baptism, they could not ignore him, and thought it the best policy to make an official inquiry into his claims.

We do not read that our Lord ever had a similar honor paid Him. His birth, though also announced by an angel, was announced in privacy to the Blessed Virgin, (Luke 1) while his way of life, which had nothing of the hermit or ascetic in it, attracted comparatively little admiration (Luke 7:34).

Lord, how you humbled yourself by condescending to stand as low as possible in the estimate of people and consenting that your saints and servants should take rank above you! And we, your professing followers, how sensitive we show ourselves to the slightest loss of human esteem! How sore we get when others supersede us in popular favor and attract more admiration than ourselves! Oh for grace to “follow the example of thy great humility!”

Edward Meyrick Ghoulburn (1818–1897) was an English churchman, author, Bampton lecturer, and an antagonist of higher criticism. He became dean of Norwich. Today’s devotional was written for the fourth Sunday in Advent.