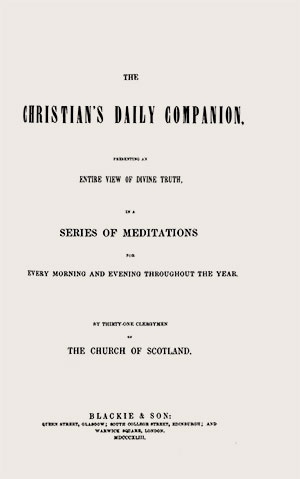 But you are a chosen people, a royal priesthood, a holy nation, God’s special possession, that you may declare the praises of him who called you out of darkness into his wonderful light—1 Peter 2:9 (NIV).

It is useful often to remind believers of what they are. A remembrance upon their part of this, can scarcely fail to renew their sense of infinite obligation and thus to humble them and animate them to “walk in a manner worthy of the Lord, fully pleasing to him” [Colossians 1:10 ESV].

The Israelites were a chosen generation. Likewise, believers in Christ are the objects of God’s everlasting love, irrespective of any foreseen qualities in themselves. They have not chosen him, but he has chosen them and called them with a holy calling. And, although they belong to different people and languages, they are of the spiritual seed of Abraham. Born from above, united in one head, and partakers of one life, they have one hope on earth, one home in heaven.

To represent the higher honor of the saints in the gospel age, Peter combines two offices never united in the Jewish church. Jewish kings were not priests; neither were all the tribes of ancient Israel admissible to the priesthood. But in regard to Christians it is true of them all that they are kings, inasmuch as they are made conquerors in Christ over their spiritual enemies. They are priests—the way into the holiest of all has been open to each of them. No exclusion but that of their own unbelieving and suspicious hearts exists to their entering in. The altar has been prepared and consecrated upon which they are enjoined to lay the bloodless sacrifice of their whole persons “holy and acceptable unto God, which is their reasonable service” [Romans 12:2].

Like Israel of old, believers in Christ are a holy nation. The true church of Christ, separated from the world, washed in the fountain opened for sin and uncleanness, sanctified by the word applied by his efficacious working, in whose hand it becomes the incorruptible seed that lives and abides forever, the church stands forth with the inscription upon it of HOLY TO THE LORD [Exodus 28:36, Jeremiah 2:3, etc.].

He who has transferred them from the darkness, oppression, and misery of sin, into the light and privileges of the gospel, has expressly told them that he has done so with the intent that they should show forth his praise. Insofar as they fail to do so, they frustrate the very intention of their heavenly calling.

Let us seek grace to prove that we are a chosen generation by choosing God as the portion of our souls; that we are kings by maintaining the dignity of Christian character and ascendency over the lusts of the flesh; that we are priests by devoting ourselves anew as living sacrifices to God; that we are citizens of the holy nation by being holy, harmless, undefiled, and separate from sinners; and that we are called out of darkness by living as children of light.

The Christian’s Daily Companion was the work of thirty-one contributors from the Church of Scotland, each of whom provided morning and evening meditations for the days assigned them. Today’s author, John MacFarlane (1798–1875), was a minister in the village of Colessie, in Fife, Scotland. Our devotional is condensed from his much longer meditation.