Pray for a world governed by God 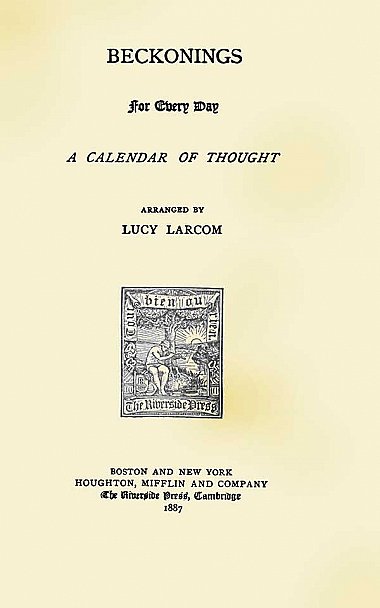 Title page of Larcom’s Beckonings for Every Day, a Calendar of Thought

Your kingdom come, your will be done, on earth as it is in heaven—Matthew 6:10 (ESV).

I hear men speak continually of going to a “better world,” rather than of its coming to them: but in [the Lord’s Prayer], which they have straight from the lips of the Light of the World, there is not anything about going to another world; only of another government coming into this, which will constitute it a world indeed: new heavens and a new earth. “Your kingdom come, your will be done on earth as it is in heaven.”

John Ruskin (1819–1900) was an English art critic, philanthropist, and precursor of environmentalism. Lucy Larcom (1824-1893), who included his thought in a compilation she produced, grew up in poverty in New England where she became an inspirational poet and author.

John Ruskin. “November 20” in Beckonings for Every Day, a Calendar of Thought, arranged by Lucy Larcom. Boston and New York: Houghton Mifflin, 1887.