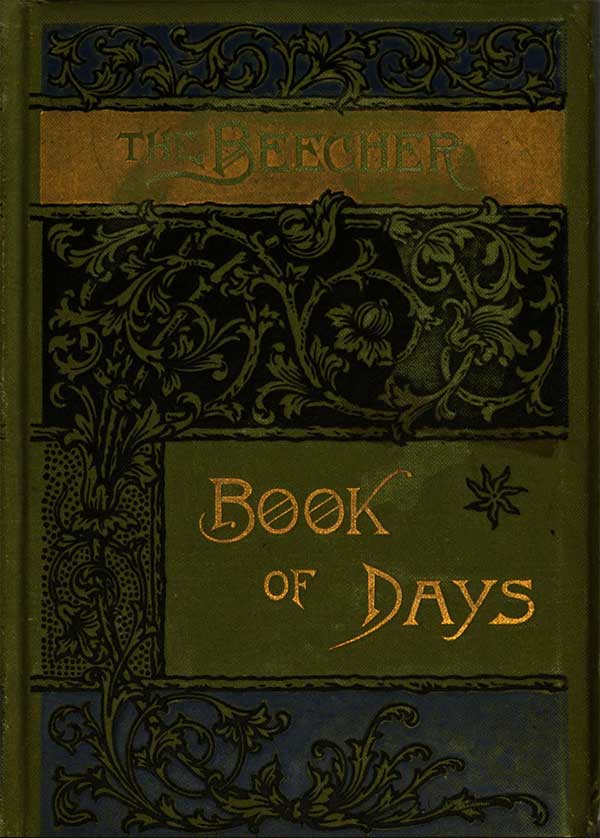 Cover of The Beecher Book of Days

Let this mind be in you, which was also in Christ Jesus—Philippians 2:5.

By your trials and sufferings you are being made beautiful. Do not count them to be the most fortunate who seem farthest removed from God’s discipline—Henry Ward Beecher.

The same mind, the same principles, the same conduct may be in us, which were in Christ Jesus. “I have given you,” he says, “an example, that you should do as I have done to you” [John 13:15]. Having left us an example, that we should tread in his steps, he considers us able, and he would make us willing. “He learned obedience by the things which he suffered” [Hebrews 5:8]. “He was made perfect through suffering” [Hebrews 2:10].

An example, to be truly such, must be level to our nature and condition. To be above or below these, destroys its applicability, and, of course, its binding power. If the Savior was tempted differently from us, his resistance by superior power is an impossibility with us. Jesus Christ has spread over his religion the ... complete and beautiful illustration of his own life. He possessed the same nature, and was placed in the same condition as ourselves; and his example, being human, exhibits to us the same kind of virtues, practiced in the same manner, and under similar circumstances of difficulty and temptation, as we ourselves experience....

In all things it was appropriate for Christ to be made like us. He was subject to the same infirmities and passions, to the same troubles and temptations, as well as to the same generalities of duty. His example takes in a very great range of virtue....

In a word, his behavior was free, open, and affable—endearing and admirably fitted for general imitation. If we are prosperous, let us remember Christ used the world without abusing it; if afflicted, let us remember he went up to his Father's throne by the steps of suffering.—Charles Brooks

Henry Ward Beecher (1813–1887) was a well-known Congregational clergyman, reformer, and advocate for the abolition of slavery, who was declared “not guilty” at the end of a sensational trial for adultery. Today’s first quote came from his sermon “Beauty.” The second is from Charles Brooks’s (1795–1872) Daily Monitor. In its preface this minister of Third Church in Hingham, Massachusetts, declared his intention was “to convey heat rather than light.”

Charles Brooks. Daily Monitor, or Reflections for Each Day of the Year… Boston: N.S. Simpkins & Co., 1828.