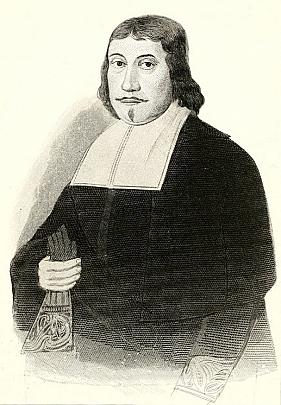 Edward Rawson, agent of the colony in persecuting Quakers.

Boston’s Puritans strongly opposed Quakers, whose teachings they considered heretical. They whipped William Robinson publically because he was regarded as a Quaker teacher. Others they banished. Eventually they executed several Quakers. Here is a warrant issued on this day 12 September 1659 freeing four Quakers from jail and banishing them.

“You are required by these [ie: this warrant], presently to set at liberty William Robinson, Marmaduke Stevenson, Mary Dyar, and Nicholas Davis, who, by an order of the court and council, had been imprisoned, because it appeared by their own confession, words, and actions, that they are Quakers: wherefore, a sentence was pronounced against them, to depart this jurisdiction, on pain of death; and that they must answer it at their peril, if they, or any of them, after the 14th of this present month, September, are found within this jurisdiction, or any part thereof.