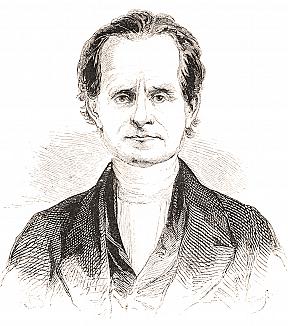 Leonard Bacon was brimming with idealism and hope early in the nineteenth century.

As America gained strength in the early years of the nineteenth century, societies and mission enterprises rose from the young nation’s idealism and self-assurance. Leonard Bacon, a young minister who would become one of the most influential in New England, spoke in the Park Street Church, Boston, on this day, 4 July, 1824, declaring that Americans might even be able to lift Africa out of its centuries of misery.

“Surely . . . it must be regarded as a privilege. . . . that our means of doing good are limited by no remoteness of country or distance of duration, but we may operate, if we will, to assuage the miseries of another hemisphere, or to prevent the necessities of an unborn generation. The time has been when a man might weep over the wrongs of Africa, and he might look forward to weep over the hopelessness of her degradation, till his heart should bleed; and yet his tears would be all that he could give her. He might relieve the beggar at his door, but he could do nothing for a dying continent. He might provide for his children, but he could do nothing for the nations that were yet to be born to an inheritance of utter wretchedness. Then the privilege of engaging in schemes of magnificent benevolence belonged only to princes and to men of princely possessions; but now the progress of improvement has brought down this privilege to the reach of every individual. . . . It is ours, if we will, to put forth our contributions and thus to operate not ineffectually for the relief and renovation of a continent over which one tide of misery has swept without ebb and without restraint for unremembered centuries. It is ours, if we will, to do something that shall tell on all the coming ages of a race which has been persecuted and enslaved, trodden down and despised, for a thousand generations. Our Father has made us the almoners of his love. He has raised us to partake, as it were, in the ubiquity of his own beneficence. Shall we be unworthy of the trust? God forbid!”