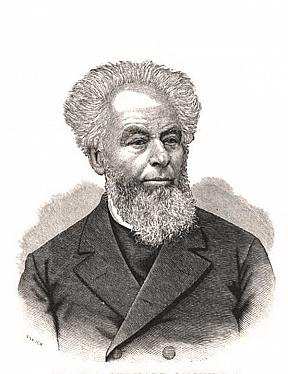 John Gerhard Oncken became a Christian while visiting England as a teen. A desire to see Germans converted to genuine faith caused him to volunteer as a missionary with the newly-formed Continental Society. His success was immediate but met opposition from the established Lutheran church. After a few years, Oncken became convinced that only believers above the age of consent should be baptized, and he adopted Baptist views. He requested that someone be sent to perform the rite of baptism on himself and a small group of followers. An American, Barnas Sears of Hudson Valley Baptist Association, eventually baptized the group in the Elbe under cover of darkness—the rite was illegal outside the established church in Hamburg, where memories of Anabaptist uprisings three centuries earlier still colored national thinking. Sears then issued Oncken an ordination certificate on this day, April 23, 1834. Oncken was so zealous and successful in his evangelistic efforts that Baptists in Bulgaria, Denmark, Finland, Holland, Hungary, Poland, Russia, and Switzerland look back to him as their spiritual ancestor.

“This is to testify to all whom it may concern, that, at the request of the Baptist Church in this place, after being fully satisfied of your personal piety, of the correctness of your views of Christian doctrine, of your possessing those ministerial qualifications specified in the scripture, and of your being called both by the Spirit and Providence of God to the work of the ministry, I have by prayer and the imposition of hands solemnly set you apart to that responsible office; and in the name of the church in which I hold an official standing as a regular ordained minister, pronounce you scripturally invested with all the powers which belong to a pastor of the flock of Christ and to a minister of the gospel.”