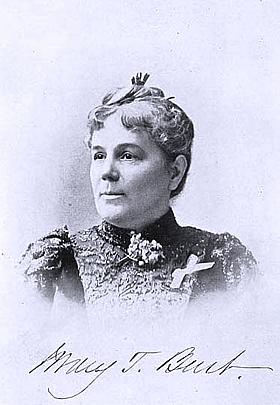 The national Women’s Christian Temperance Union was organized at Chautauqua, NY in 1874. In 1894, the New York organization felt it was time to assess its accomplishments and stir up the zeal of its members with a history of its first twenty years. Mary T. Burt, third president of the Woman's National Christian Temperance Union, wrote the preface to Two Decades, dated this day 9 November 1894.

“For twenty years this organization has stood with undaunted front against the sin of the state as represented by the legalized traffic in intoxicating liquors and by the awful vice that would put a premium on woman’s shame.

“During this time it has uttered its shibboleth that that political party, and that only, which declares in its platform for the complete prohibition of the liquor traffic, can have its influence and its prayers. There have been days of darkness and disaster, but by the grace of God no weapon turned against the union has prospered, and every tongue that has risen in judgment has been condemned. The growth of the organization has been marvelous, for in twenty years it has grown from a few hundred members to twenty-two thousand, and from a few auxiliaries to over nine hundred, which cover as a network the entire state. Its workers are indefatigable, and wage their peaceful war for “sweeter manners, purer laws,” with an earnestness that carries conviction to the hearts of the people and the law-makers of the state. And wherever there is a wrong to right, an evil to attack, or a hand to help, there will you find a woman with a white ribbon on her breast.”