Huldrych Zwingli: His Path to Reformation 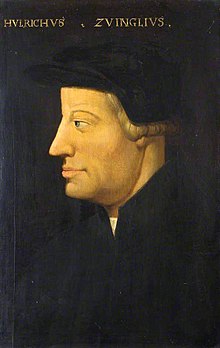 While Luther was still trying to discover why God hated him as much as his father did, Zwingli was already being awakened to a reforming spirit. It is the how and why of that awakening which will concern us in the post to follow.

It is the contention in what follows that Zwingli experienced his own ‘reading Romans in the loo’ moment (said to have been experienced by Luther sometime after 1517.) That moment, for Zwingli, was the Battle of Marignano in 1515. That was the breaking point for the Swiss Chaplain and it was the event which changed both his life and his theology. Or better, that was the moment which changed his theology, and thus his life.

The Battle of Marignano was waged in the territory of the Italian village of the same name on September 13-14, 1515. The Swiss troops were decimated by the French forces and that so overwhelmingly that 10,000 of the 22,000 Swiss on the field were killed and many more injured. “War History Online” tells us:

On the eve of battle, Francis decided to arrange his dozens of field guns along the front lines in the center of his formation, with cavalry out wide on the flanks. The Swiss massed into a large infantry formation as they had no cavalry or artillery to speak of. Their strategy was to charge straight at the cannons, take the position and turn the artillery around to fire back on the French. As bold as the move seems, such tactics had worked for them in the past.

The Swiss charge occurred just before sunset and was so rapid that the French artillery had trouble landing hits on the charging infantry. The Swiss captured some artillery and ran into fierce fights with the Landsknechts. The two fighting units had been rivals competing for the title of the best combat unit in Europe, and they fought fiercely through the twilight. Charges by the French cavalry led by King Francis helped to finally push the Swiss back. Many officers and nobles fought and died during the last frantic nighttime exchanges before both sides withdrew for the night.

The next day the order of battle was the same, and the Swiss tactics remained the same. The Swiss launched a massive charge at the cannons, but this time, the artillery crews were prepared. The French shots ripped through the tight formations of the Swiss. Undaunted, the Swiss continued to charge and pushed right up to the line of cannons. A fierce fight ensued with the Landsknechts, cavalry charges and point-blank cannon fire against the nearly unmovable mass of disciplined Swiss. The battle was a gridlock until French-allied Venetian forces scrambled onto the battlefield. Their extra flanking attacks and manpower finally turned the tide and forced a Swiss retreat. The sustained cannon fire, cavalry charges, and grueling fight cost the Swiss dearly. They likely lost more than half their men, compared to about 5,000 French casualties.

The young Chaplain there in support of the troops from Glarus, Huldrych Zwingli, was intensely affected by what he saw there. The experiences he suffered on behalf of the dead, dying, and wounded so filled his soul that from that very week he began to understand that the Church was in serious need of change and that because only through a change in the Church could such conflicts be avoided in the future.

Up to that point in his life Zwingli spoke, wrote, and acted like any other 16th century Catholic priest. But something happened in the immediate aftermath of Marignano that convinced Zwingli not only that mercenary service for young Swiss men was immoral, but that the Church which supported such mercenarianism too was in serious need of correction, of reformation.

As one of his 19th century biographers put it (so very well):

The defeat of Marignano was a severe blow to the Swiss Republic. On that day many of the noblest sons of the nation perished. Yet the catastrophe, dire as it was, carried with it valuable lessons. It opened the eyes of the better class of citizens to the perils against which Zwingli and others for years had vainly warned them. They began to see the folly of the foreign alliances, and to penetrate the selfishness of their instigators. These foreign wars served to call forth the ardent patriotism of Zwingli. They are important also because of the part which they played in his development as a reformer. His going to Italy, and his removal a few years later to Einsiedeln, may well be compared in their effect to Luther’s visit to Rome. At this time the scales dropped from his eyes with reference to many Roman errors.

Upon returning to Glarus Zwingli began to write, and think, about his theology and how that theology was or was not aligned with the spirit of Christ and the meaning of Scripture. So, for example, the first letter we have from him preserved post- Marignano preserved is to Erasmus of Rotterdam, dated 29, 4, 1516; he writes of ‘Swiss blood’.

The reference to Swiss blood is not accidental, nor is it accidental that Zwingli sent a letter to the leader of the Humanist movement, a movement known to object to war, a few months after the bBattle which changed Zwingli’s life.

Also relevant is the fact that Zwingli’s first poetic work post Marignano is ‘The Labyrinth’, written in the early part of 1516, nearly contemporaneously with his letter to Erasmus. In it, according to an edition of Zwingli’s works,

“The one-eyed lion is Spain—Aragon; the crowned eagle is Maximilian; the winged lion is Venice; the cock is France; the ox is the Swiss; the cats are those who entice the Swiss to become mercenaries; the bear is the abbot of St. Gall; the ring is the law of Schwyz and Glarus; the dogs are the allies of the Swiss cantons.”

At the conclusion of the poem, Zwingli tellingly remarks,

See how for a little gain we barter away our lives; thus we plague our neighbours, and injure all natural right with wars, quarrels, and other matters, so that we might think the hellish furies to have broken loose. Tell me what have we of Christians more than the name? No one shows patience or wisdom. Most of all the princes have learnt nothing except to pursue their own desires. As soon as a notion enters their heads, everything else must cease. But when God allows peace to shine upon us, men become beasts. In order, however, not to stir the fire (for men are very angry, when abused), I have bethought myself of the pleasant fashion of a series of fables, which you can easily understand.

In the context of the Battle of Marignano’s wake Zwingli’s remarks make it quite clear that he believes things should be different. In short, that things need to change. It is precisely this desire for change that drives him from this moment forward till the very end of his life--, ironically, on the field of bBattle at Kappel-am-Albis. It is this desire for change that drives him to Scripture and thus to borrow a copy of Erasmus’s newly published Greek New Testament and transcribe from it a copy, for himself, in 1516, the Letters of Paul.

Let us turn now to Zwingli’s pre 1517 letters to trace his theological development pre-Luther in order to solidify our suggestion that before anyone had ever heard of Martin Luther outside of Wittenberg, Zwingli was already a Reformer.

The Zwingli correspondence between September 1515 and the end of 1517 includes the following:

Only two of the preserved letters from this period originate with Zwingli and, consequently, are the only reliable sources for what he was himself thinking (along, of course, with his only published work from the same period of time- ‘The Labyrinth’.

The first letter is, to Vadian, and written on 13 June, 1517 from Einsiedeln and the second is, to the officials of Winterthur from Zurich on October 30, 1517.

Zwingli writes, then, first, rather cryptically, to Vadian from Einsiedeln on June 13, 1517, thusly explaining his leaving Glarus:

“I have changed my residence, not at the stimulus of desire or of avarice, but because of the wiles of the French; and now I am at Einsiedeln.… What disaster that French faction has at last wrought me the wind of rumour has doubtless wafted to you. In the things done I too have had a part, but I have borne or have learned to bear many misfortunes.”

After Marignano, Zwingli’s anti-mercenary preaching opened him to anger on the part of those who sympathized with the French, who were clearly in Zwingli’s sights as an object of theological anger, along with those who benefitted from the trade in Swiss flesh through mercenarianism. That anger boiled over and essentially forced Zwingli to depart Glarus for safer pastures to the North-West.

In his letter of October 30, 1517, Zwingli writes in a fairly conciliatory and nearly apologetic tone, explains himself to the folk in Wintertur and precisely offers his evidence for acting as he has. What is important here is that his core concern is the proper preaching of the Word. This concern is expressed on, again the 30th of October--t. The day before Luther’s putative hammer act. For Zwingli, the Word is central- a conclusion at which Luther will not arrive for several more years.

Huldrych Zwingli was not dependent on Luther or his teachings for his theological awakening to the centrality of the Scriptures for Christian doctrine and Church practice. Independent of Luther, and in response to the horrific events of the Battle of Marignano, Zwingli became ever more convinced that the practice of the Church of Rome was at odds with the teaching of the Bible. As this conviction grew from 1515 through mid 1517, Zwingli began his turn from the centrality of Tradition for ministerial practice towards the centrality of preaching and applying the Word of God.

Zwingli’s ‘tower moment’ was The Battle of Marignano and thus it is that moment, that event, from which we must date his ‘conversion’. What he had then was an awakening which, over time, became Reformed (in the best, historical sense of the word) Christianity. And it all happened before Luther was known outside the University of Wittenberg.

Jim West, ThD, is Professor of Biblical Studies at Ming Hua Theological College and Pastor of Petros Baptist Church in Petros, TN. Dr. West is a frequent contributor to CHI's blog. To read more on Zwingli from Dr. West, check out issue #118: The People's Reformation.