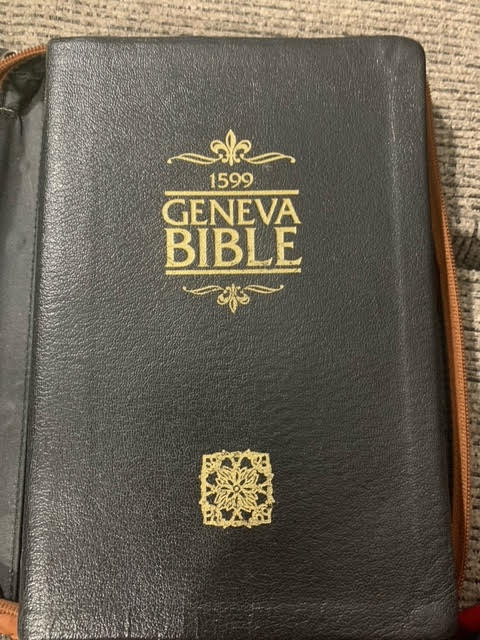 A 1599 printing of the Geneva Bible

Tyndale gave his life for it; Coverdale and others completed his work. King Henry VIII eventually relented and allowed the publication of the Holy Bible in the English language. This is not about that particular Bible, but about the Bible that came to America on the Mayflower and then disappeared into history, overshadowed by another, lesser work.

In 1560, a new Bible was published. This Bible was groundbreaking, and although little known today and mostly ignored in history, every Christian is blessed by the efforts of its translators and publishers. This is the Geneva Bible. Using the work of Tyndale, Coverdale, and other pioneers who often put their lives in danger to bring the Bible into the lives of the common people, it was the first Bible to break the books into numbered chapters and verses. The publishers added considerable marginal notes to help people understand the verses, and also cross-referenced many passages, thus uniting the Bible into a cohesive whole. Most people today would not know how to read or study the Bible if this information was removed. It is also invaluable to commentators and pastors. Additionally, the writers, Tyndale and others, used the original Hebrew and Greek to make their translations rather than the Latin Vulgate. (To read more about the translating work of Tyndale and Coverdale, read this article from CH issue #43 here.)

In England, the Great Bible drew from Tyndale; the Bishops Bible and the later King James drew from Tyndale and the Geneva. But the Bible that found its way into the homes of the English people was the Geneva Bible. It was easy to use and easy to study and learn from because of those marginal notes, cross-references, and being published in the common vernacular.

However, the Geneva Bible was hated by both the nobility and the Church. The problem was those pesky marginal notes and cross-references! They were critical of the growing problem of slavery; an issue for English ship captains who were beginning to make money transporting slaves from Africa to the Spanish and Portuguese colonies in South America. The notes criticized the clergy, supporting the idea of lay elders rather than only a professional class. They were also critical of the Pope, and worst of all, they were against the divine right of the king to rule.

The only solution was to block it. In 1568, the Bishops Bible was published. Although partially using the Tyndale work, it mostly translated from the Latin Vulgate. It contained numerous errors and had to be revised more than 50 times over the next few years. Though it incorporated the chapter and verse breaks of the Geneva, its multiple errors and revisions were too problematic. The Geneva remained popular, and despite many reprints, the Geneva did not require any revisions. When James ascended to the throne of England, he came with the opinion that God gave him the throne and that his right to rule was an absolute divine right. The Geneva stood in his way. Maybe the people listened to the clergy preach from the Bishops Bible, but at home they read the Geneva, taught their children from the Geneva, and discovered the errors of the church by studying the Geneva.

Consequently, James assembled a team of “translators” in 1611. Using the idea that they were not making a new translation, but making a “good one better” (meaning the Bishops Bible), they published the King James Bible. It, too, incorporated the Geneva chapter and verse breaks. It also included the Apocrypha, books the Roman church used, but which had been removed from the Geneva (the 1560 edition did include the books in an “inter-testamental” section). No marginal notes, no cross-references (as late as 1715, some publishers did include at least some marginal notes). It was a publishing failure. The people did not flock to the new Bible, they continued to use the tried and true Geneva. What could the king do? He banned the publishing of the Geneva Bible, and authorized only his new Bible to be published in English. So, from 1616 forward, the Geneva began to fade from history. The King James underwent several revisions, the most important being the removal of the Apocrypha, although it continued to be included in some printings into the 1800’s. All of the KJV printings prior to 1666 contained the Apocrypha, and the inclusion of it ended entirely in 1826 - for cost-savings, not because it does not belong!

Separatists remained loyal to the Geneva in large part. The Mayflower pilgrims brought the Geneva to America. As I learned my family history as a 10th generation descendant of John and Priscilla (speak for yourself, John) Alden, I became interested in the Geneva Bible. John’s Bible is on display in the museum at his home near Plymouth, Massachusetts. My paternal grandmother, Miranda, was the last in her line to bear the Alden name itself.

The KJV used today is not the 1611 “translation,” and interestingly, just as the original, is nearly word-for-word identical to the Geneva. Because of the exceptionally close copy of the KJV to the Geneva, I refer to the “Authorized Version” as the “Plagiarized Version.” It is simply hard to believe that being so close, with the exception of maybe 10 places, the KJV is not simply plagiarized rather than an actual work of dedicated scholars. (Although, perhaps the first printers, having the Geneva already typeset, simply made a few adjustments and ran with it. Who knows?) 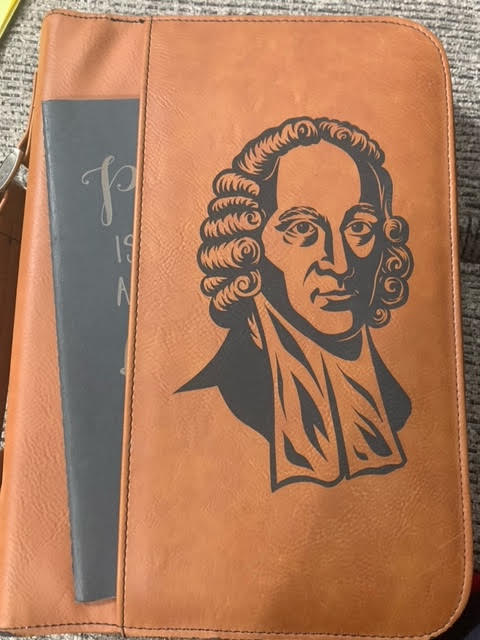 Happily, the 1599 Geneva Bible has been dusted off, brought out of near total obscurity, updated into modern English spelling (would you rather read “Iefus faid vnto him” or “Jesus said unto him?”), and reprinted. As a descendant of John Alden, and a Reformed Christian, I am pleased to have been gifted one of these Geneva Bibles several years ago, complete with the Reformers marginal notes and cross-references.

Jonathan Edwards is an amateur Christian historian living in the Salt Lake Valley. He has studied many eras of Christian history in depth, most recently focusing on the Reformation. He is a descendant of John Alden, a crew member of the historic 1620 voyage of the Mayflower, which brought the English settlers known as Pilgrims to Plymouth Colony in Massachusetts. To learn more about the Pilgrims, check out issue #84: Pilgrims and Exiles. You can also read more about bible translations and how Americans have used them in our "America's book" series, issues #138 and #143.