How the art of the church points to the Christ of the Bible.

While our Christian History Institute tour focused much of our time in Turkey and Greece following in the footsteps of first-century believers such as Paul and John, we also spent time learning about the Christians who came after them. During our time in Istanbul and Athens, we visited churches built by Christians in the centuries between Paul’s time and ours: Eastern Orthodox Churches. The artwork and icons of two very different churches that we visited particularly caught my attention.

The Protestant church I grew up in was intentionally plain, reflecting the values of the Anabaptist faith. The walls were devoid of images, save the occasional 1990’s-style, homemade felt banner with messages like, “Praise the Lord!” And the simple chapel in the seminary I attended was built to feel like a sparse cave, recalling early Anabaptists’ meetings in caves. By contrast, the ornately-designed and richly-decorated churches we visited in Turkey and Greece overwhelmed my senses. Every inch of wall and ceiling was covered in colorful, dense images in an unfamiliar style. But as I looked closer, I realized they were all telling stories I knew—Bible stories. The walls and ceilings of these churches reminded me of the illustrations from the children’s Bibles I grew up with. 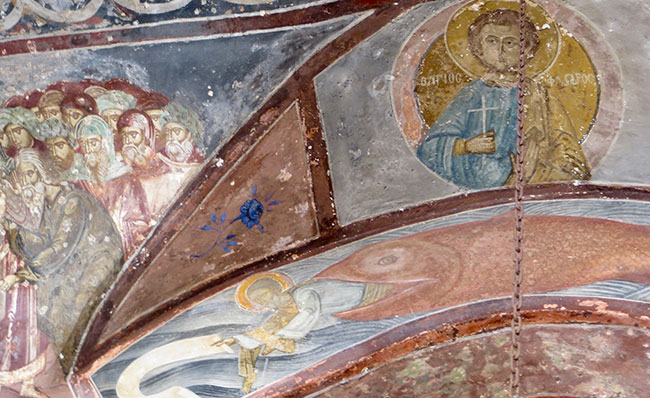 The first is the Chora (or “Country”) Church. It was originally built in the 4th century outside the city walls, though much of it dates to the 11th century and its location is now in modern-day Istanbul. It’s a small church with a main area that could seat only about 50 people. The marble floors are impressive, but what took my breath away were the paintings covering the walls and ceilings. The underside of each archway contains a different scene: Mary and Joseph traveling to Bethlehen, Jesus being tempted in the desert, Jesus turning water into wine at Cana. I felt like a little child: walking very slowly, looking up at the ceiling, marveling at all that I saw. One dome was filled with Old Testament prophets like slices in a cake. I stared intently trying to decipher the names in Greek. I wonder if Christians who worshipped there, but could not read, recognized each person by their image. 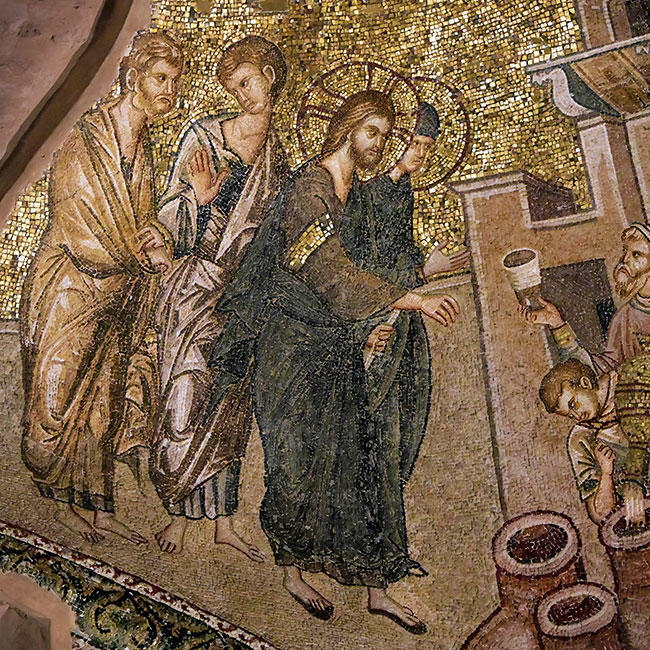 [Cana (above), and Temptation (below) courtesy of Doug Johnson 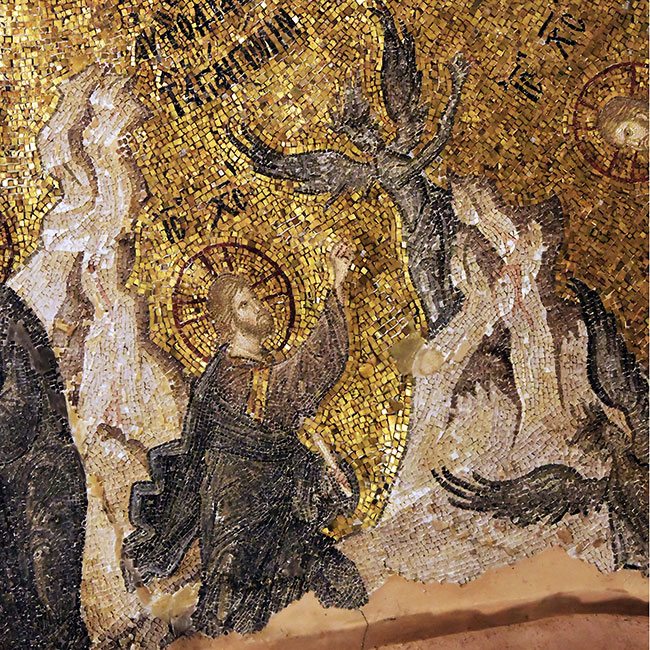 As Protestants, we’ve worried that icons encourage idol worship. What I learned from the Orthodox Christians whose places of worship we visited is that they do not worship the icons. On the contrary, the icons point them toward God. These images are like windows that Christians look through seeking to catch a glimpse of God.  It was an icon in the second church that helped me understand this idea.

The Orthodox church that stopped me in my tracks was the more modern Metropolitan Cathedral of Athens (built from 1842-1862). The large artwork above the entrance depicts Gabriel’s visit to Mary (Luke 1:26-38). 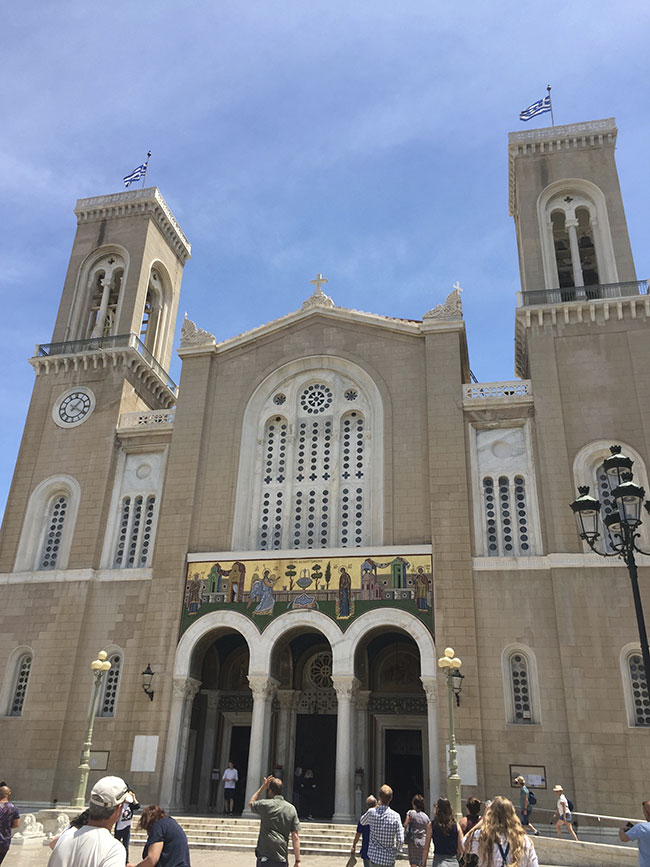 [Outside Metropolitan Church of Athens, courtesy of Linda Curtis]

As I stepped through the doorway, I stepped right into the story. 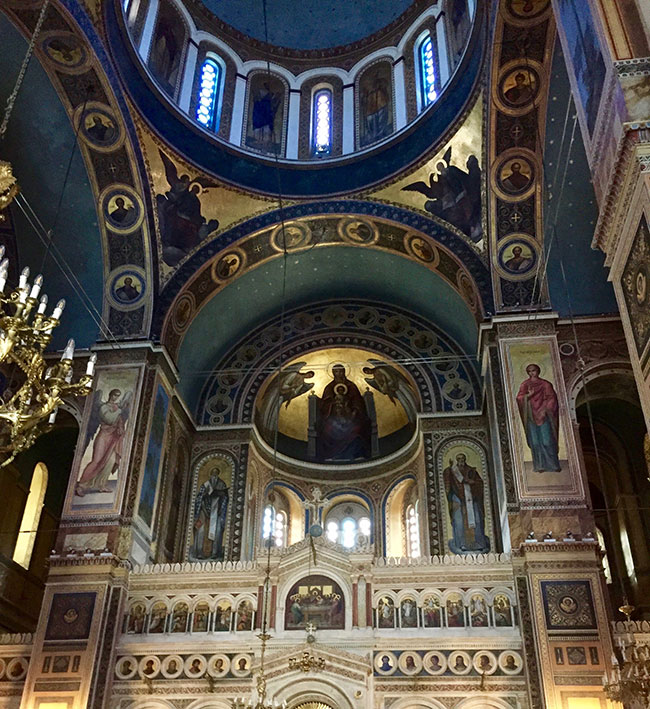 [Inside Metropolitan Church of Athens, courtesy of Linda Curtis]

There in the front was a life size image of Mary accepting the calling from God to be Jesus’ mother. I stood in awe for a long time before this painting of an angel visiting Mary and giving her this terrifying news. She would be pregnant by the Holy Spirit out of wedlock (she could be stoned to death for this alone) and then give birth to God’s own son. If she (and the child inside her) managed to avoid the stoning, then she would have the unenviable task of figuring out how to be a mom to the son of God. Mary’s humble and gutsy response, “I am the Lord’s servant,” both inspires and baffles me. The art allowed me to connect with Jesus’ mother in a new way. I could see with my eyes that this was a young woman like me answering God’s call. 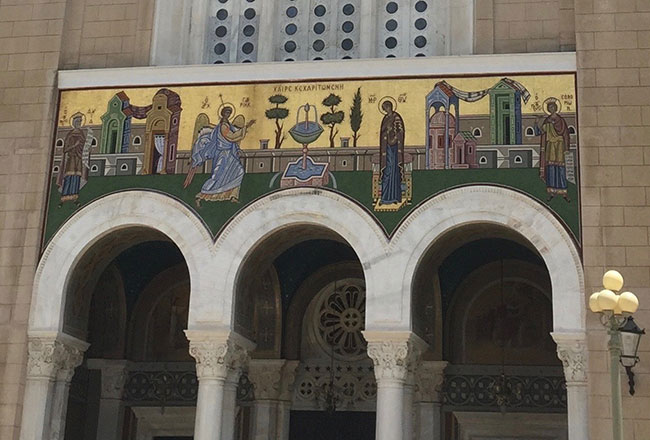 Standing in front of the ornate painting, I thought about my own calling. I was in the thick of seeking to follow God’s call to me by looking for a pastoral role. I love my calling, but it also terrifies me. The icon reminded me of Mary’s fear and courage in the face of her own terrifying calling. It drew me back into the biblical story and urged me to continue making the humble and gutsy affirmation, “I am the Lord’s servant.” I don’t know where that affirmation will lead just yet. But looking through the icon as a window into the amazing things God did in Mary’s life urged me to follow Mary’s example and keep saying “yes” to God.

My sisters and brothers in the Orthodox churches of Turkey and Greece, both my contemporaries and those from centuries past, reminded me that I can experience God’s presence with all of the senses God gave me. Their icons pointed me back to the familiar stories of Scripture while also bringing them to life in a new way. They stirred in my heart a yearning not just to hear Jesus but also to see and touch him in my everyday life. 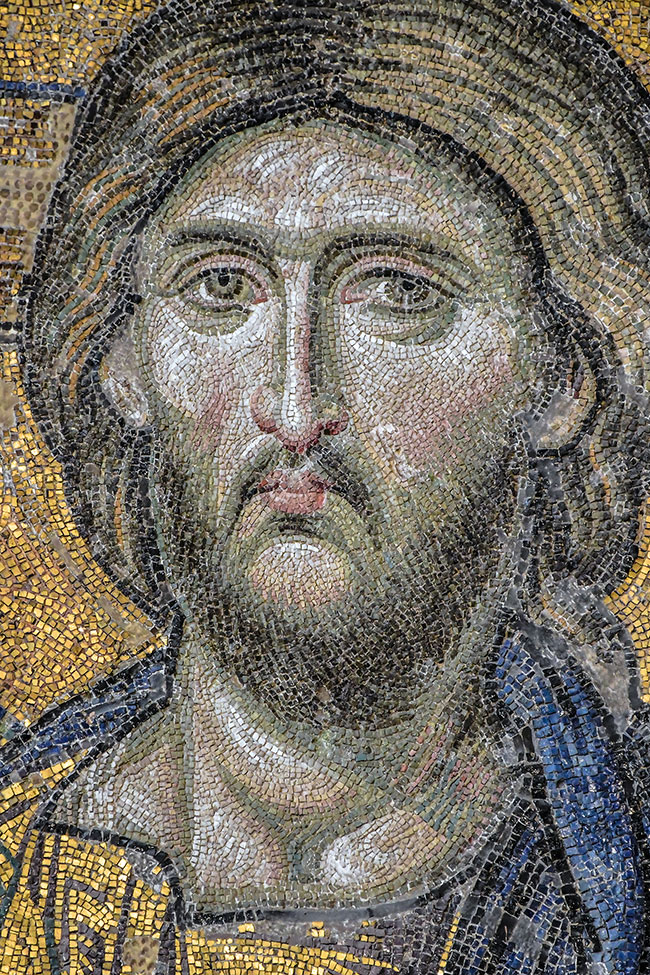 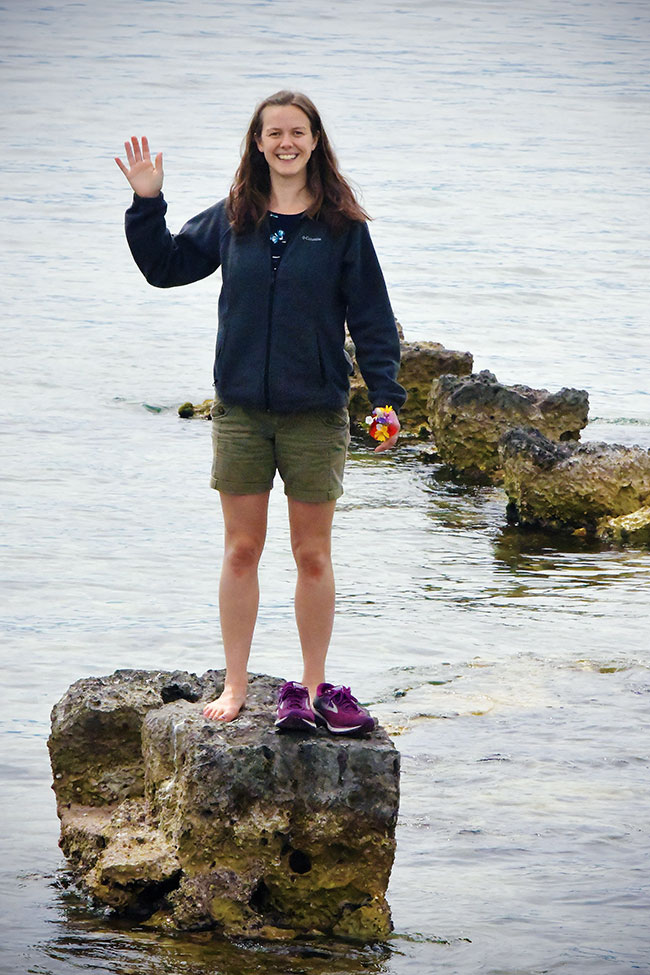 [Michelle, author of this series, standing on ruins of the port at Corinth, where Paul would have embarked and disembarked, photo courtesy of Doug Johnson]

This is the third and final photo journal of CHI’s trip to biblical Turkey and Greece. Read Part 1 on Paul and Ephesus and Part 2 on John’s Revelation on Patmos.

For more on how art, icons, and other media have contributed to Christian worship, check out the video The History of Christian Worship: Part 5, The Expression.  The Orthodox faith has been covered in various issues of Christian Historymagazine, but CHM issue #54 is entirely devoted to our Orthodox brothers and sisters.  Read it online!

If you’ve enjoyed this three-part series of blog posts about Biblical Turkey and Greece, you might want to check out this collection of five unique videos on the subject from our partners Vision Video.