“For me it is enough that God is here, to whose goodness I commend my soul.” St. Bartholomew’s Day Massacre (1572). 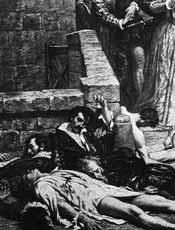 This is an account of the start of the St. Bartholomew’s Day Massacre given by statesman and historian De Thou (1553—1617) who remembered the event from his youth.

The wars of religion had been continuing in France on and off since 1562, but Catholic and Huguenot had come to a truce in 1570. To help, and to symbolize, the reconciliation between the two sides, ‘King’ Henry of Navarre, a leading Huguenot noble, was married to Marguerite, sister to the Catholic King of France on August 18 1572.

The one person most put out by this was the King’s Mother Catherine de’ Medici: she was used to being just about the most powerful person in France, and she felt seriously threatened by the influence that the Huguenot leader Admiral Gaspard de Coligny (a devout Calvinist aristocrat) would now have over the King. In this she had the full support of the Duke of Guise (a Catholic military commander and head of the most powerful aristocratic family in France).

On August 22, they tried to kill Coligny, who was in Paris along with thousands of other Huguenots for the wedding. They only wounded him, and of course the Huguenots were outraged. de’ Medici panicked and ordered a massacre of all the Huguenots in Paris, starting with Coligny. It got out of hand. How many died is hard to say, but at least 3,000 perished in Paris alone and many times that number throughout France. But rather than finishing off the Huguenot side, the massacre threw the country back into war again. It was a source of bitterness and religious division for centuries after.

De Thou’s account focuses on the death of Coligny himself.

So it was determined to exterminate all the Protestants and the plan was approved by the Queen. They discussed for some time whether they should make an exception of the King of Navarre and the Prince of Cond√É¬©. All agreed that the King of Navarre should be spared by reason of the royal dignity and the new alliance. The Duke of Guise, who was put in full command of the enterprise, summoned by night several captains of the Catholic Swiss mercenaries from the five little cantons, and some commanders of French companies, and told them that it was the will of the King that, according to God’s will, they should take vengeance on the band of rebels while they had the beasts in the toils. Victory was easy and the booty great and to be obtained without danger. The signal to commence the massacre should be given by the bell of the palace, and the marks by which they should recognize each other in the darkness were a bit of white linen tied around the left arm and a white cross on the hat.

Meanwhile Coligny awoke and recognized from the noise that a riot was taking place. Nevertheless he remained assured of the King’s good will, being persuaded thereof either by his credulity or by Teligny, his son—in—law: He believed the populace had been stirred up by the Guises and that quiet would be restored as soon as it was seen that soldiers of the guard, under the command of Cosseins, had been detailed to protect him and guard his property.

But when he perceived that the noise increased and that some one had fired an harquebus in the courtyard of his dwelling, then at length, conjecturing what it might be, but too late, he arose from his bed and having put on his dressing gown he said his prayers, leaning against the wall. Labonne held the key of the house, and when Cosseins commanded him, in the King’s name, to open the door he obeyed at once without fear and apprehending nothing. But scarcely had Cosseins entered when Labonne, who stood in his way, was killed with a dagger thrust. The Swiss who were in the courtyard, when they saw this, fled into the house and closed the door, piling against it tables and all the furniture they could find. It was in the first scrimmage that a Swiss was killed with a ball from an harquebus fired by one of Cosseins’ people. But finally the conspirators broke through the door and mounted the stairway, Cosseins, Attin, Corberan de Cordillac, Seigneur de Sarlabous, first captains of the regiment of the guards, Achilles Petrucci of Siena, all armed with cuirasses, and Besme the German, who had been brought up as a page in the house of Guise; for the Duke of Guise was lodged at court, together with the great nobles and others who accompanied him.

After Coligny had said his prayers with Merlin the minister, he said, without any appearance of alarm, to those who were present (and almost all were surgeons, for few of them were of his retinue): “I see clearly that which they seek, and I am ready steadfastly to suffer that death which I have never feared and which for a long time past I have pictured to myself. I consider myself happy in feeling the approach of death and in being ready to die in God, by whose grace I hope for the life everlasting. I have no further need of human succor. Go then from this place, my friends, as quickly as you may, for fear lest you shall be involved in my misfortune, and that some day your wives shall curse me as the author of your loss. For me it is enough that God is here, to whose goodness I commend my soul, which is so soon to issue from my body.”

After these words they ascended to an upper room, whence they sought safety in flight here and there over the roofs.

Meanwhile the conspirators; having burst through the door of the chamber, entered, and when Besme, sword in hand, had demanded of Coligny, who stood near the door, “Are you Coligny?”

Coligny replied, “Yes, I am he,” with fearless countenance.

“But you, young man, respect these white hairs. What is it you would do? You cannot shorten by many days this life of mine.”

As he spoke, Besme gave him a sword thrust through the body, and having withdrawn his sword, another thrust in the mouth, by which his face was disfigured. So Coligny fell, killed with many thrusts. Others have written that Coligny in dying pronounced as though in anger these words: “Would that I might at least die at the hands of a soldier and not of a valet.”

But Attin, one of the murderers, has reported as I have written, and added that he never saw any one less afraid in so great a peril, nor die more steadfastly.

Then the Duke of Guise inquired of Besme from the courtyard if the thing were done, and when Besme answered him that it was, the Duke replied that the Chevalier d'Angouleme was unable to believe it unless he saw it; and at the same time that he made the inquiry they threw the body through the window into the courtyard, disfigured as it was with blood. When the Chevalier d'Angouleme, who could scarcely believe his eyes, had wiped away with a cloth the blood which overran the face and finally had recognized him, some say that he spurned the body with his foot. However this may be, when he left the house with his followers he said:

“Cheer up, my friends! Let us do thoroughly that which we have begun. The King commands it.”

He frequently repeated these words, and as soon as they had caused the bell of the palace clock to ring, on every side arose the cry, “To arms!” and the people ran to the house of Coligny. After his body had been treated to all sorts of insults, they threw it into a neighboring stable, and finally cut off his head, which they sent to Rome. They also shamefully mutilated him, and dragged his body through the streets to the bank of the Seine, a thing which he had formerly almost prophesied, although he did not think of anything like this.

As some children were in the act of throwing the body into the river, it was dragged out and placed upon the gibbet of Montfaucon, where it hung by the feet in chains of iron; and then they built a fire beneath, by which he was burned without being consumed; so that he was, so to speak, tortured with all the elements, since he was killed upon the earth, thrown into the water, placed upon the fire, and finally put to hang in the air. After he had served for several days as a spectacle to gratify the hate of many and arouse the just indignation of many others, who reckoned that this fury of the people would cost the King and France many a sorrowful day, Francois de Montmorency, who was nearly related to the dead man, and still more his friend, and who moreover had escaped the danger in time, had him taken by night from the gibbet by trusty men and carried to Chantilly, where he was buried in the chapel.

Eyewitness describes the butchery of thousands of Protestants in France.