“Not everything the council does, says, or defines is approved by the most true judge, Christ Jesus.” John Hus (ca. 1369 - 1415) Reformer of Bohemia perished at the stake.

Last Letters of Jan Hus. Introduced by Stephen Tomkins. Edited and prepared for the web by Dan Graves. 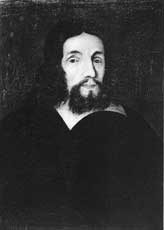 Wyclif never took his teachings beyond England, but by a strange twist of fate they proved even more influential in far Bohemia than at home. The English King married a Bohemian princess, and consequently many Czech students came to Oxford, picked up Wyclif’s ideas and took them home. Jan Hus, who became Rector of the University of Prague, read these works and accepted and taught many of their ideas. His teachings gained a huge following, including Bohemian rulers, such as Lord Wencelas of Dubá and Lord Jan of Chlum. This is because the controversial doctrines soon got mixed in with the fight for equality with the Catholic powers of the Holy Roman Empire.

Like Wyclif, Hus was driven in his thinking by his disillusionment with the state of the church, particularly his horror at the spectacle of two, and then three rival popes at once. In 1414 the Council of Constance, an ecumenical council of Catholic church leaders summoned him to come and answer a charge of heresy, promising him safe conduct. Hus went to explain himself, the churchmen found guilty and, when he refused to submit, burned him at the stake.

He died with unflinching courage, singing as he burned. His teachings lived on until the Reformation when the Hussites largely accepted Protestantism. The writings below are two letters that he wrote during his last month in prison under sentence of death and expecting to be executed any day. He was killed on July 6 1415.

Most gracious lords and most faithful lovers of truth and my comforters in the truth, appointed by God for me like angels. I cannot truly describe my gratitude for your constancy and the kindly benefits which you have shown me, a sinner, although in hope a servant of the Lord Jesus Christ. I desire that He, Jesus Christ, our most kind Creator, Redeemer, and Savior, may reward you in the present time, giving you Himself as the best reward for the future. Hence I exhort you by his mercy that you direct yourselves by His law, and particularly by his most holy commandments.

You, noble Wencelas, marry a wife and, abandoning the worldly vanities, live holily in matrimony. And you, Lord Jan, leave already the service of mortal kings and stay at home with your wife and boys in the service of God. For you see how the wheel of worldly vanity spins, now lifting one, then plunging down another, granting very brief pleasure to the man it lifts up, after which follows eternal torment in fire and darkness.

You already know now the behavior of the spirituals, who call themselves the true manifest vicars of Christ and His apostles, and proclaim themselves the holy Church and the most sacred Council that cannot err. It nonetheless did err: first by adoring [Pope] John XXIII on bended knees, kissing his feet, and calling him the most holy, although they knew that he was a base murderer, a sodomite, a simoniac, and a heretic, as they declared later in their condemnation of him. They have already cut off the head of the Church, have torn out the heart of the Church, have exhausted the never—drying fountain of the Church, and have made utterly deficient the all—sufficient and unfailing refuge of the Church to which every Christian should flee for refuge... Now faithful Christendom exists without a pope, a mere man, having Christ Jesus for its head, who directs it the best; for its heart, which vivifies it, granting the life of grace; for the fountain which irrigates it by the seven graces of the Holy Spirit; for the channel in which flow all the streams of graces; for the all—sufficient and unfailing refuge to which I, a wretch, run, firmly hoping that it will not fail me in directing, vivifying, and aiding me; but will liberate me from the sins of the present miserable life, and reward me with infinite joy.

The Council has also erred three or more times by wrongly abstracting the articles form my books, rejecting some of them by corrupting and confusing [their meaning]; and even in the latest copy of the articles by abbreviating some, as will be evident to those who compare the books with those articles. From this I have plainly learned, along with you, that not everything the council does, says, or defines is approved by the most true judge, Christ Jesus. Blessed are those therefore, who, observing the law of Christ, recognize, abandon, and repudiate the pomp, avarice, hypocrisy, and deceit of Antichrist and of his ministers, while they patiently await the advent of the most just Judge. I beseech you in the bowels of Jesus Christ that you flee evil priests but love the good according to their works; and as much as in you lies, along with other faithful barons and lords, that you do not suffer them to be oppressed. For on that account God has placed you over others.

I think that there will be a great persecution in the Kingdom of Bohemia of those who serve God faithfully, unless the Lord oppose his hand through the secular lords, whom he has enlightened in His law more than the spirituals. O, how great madness it is to condemn as error the Gospel of Christ and the Epistle of St Paul, which he received, as he says, not from men, but from Christ; and to condemn as error the act of Christ along with the acts of His apostles and other saints — namely, about the communion of the sacrament of the Lord, instituted for all adult believers! Alas! they call it an error that believing laity should be allowed to drink of the cup of the Lord, and if a priest should give them thus to drink, that he be then regarded as in error, and unless he desist, be condemned as a heretic! O Saint Paul! You say to all the faithful: “As often as you eat this bread and drink this cup, you proclaim the Lord’s death until he comes;” that is, until the Day of Judgment, when he shall come. And lo! it is even now said that the custom of the Roman Church is in opposition to it!

God be with you! Having had many reasons for the strong supposition, I wrote you as if I were to die tomorrow. But since I again learned of the postponement of my death, I am writing you once more, gracious and faithful friends in God, to show my gratitude as long as I can, ever taking pleasure in being able to converse with you by letter. I say to you that the Lord God knows why He postpones my death as well as that of my dear brother, Master Jerome, of whom I have hopes that he will die holily, without guilt., and that he will conduct himself and suffer more bravely than I, a fainthearted sinner. The Lord God has granted us a long time that we may better recollect our sins and forthrightly regret them. He has granted us time so that the long—drawn—out and great testing may divest us of our sins and bring us consolation. He has granted us time to remember our King, the merciful Lord God Jesus’ terrible disgrace, and to meditate on his cruel death and, for that reason, to suffer more gladly.

Also that we may remember that we are not to pass from the feasts of this world to the feasts of the other world, that we may remember that the saints entered the heavenly kingdom through many sufferings; for some were cut up piece by piece, others impaled, others boiled, others roasted, others flayed alive, buried alive, stoned, crucified, crushed between millstones, dragged, drowned, burned, hanged, torn in pieces, having been first vilified, imprisoned, beaten and chained. Who can describe all the tortures by which the saints of the New and the Old testament suffered for God’s truth, particularly those who rebuked the priestly wickedness and preached against it! It would be a strange thing if now one would not suffer on account of a brave stand against wickedness, especially that of the priests, which does not allow itself to be touched! I am glad that they were obliged to read my small books, which openly reveal their wickedness. I now believe that they have read them more diligently than the Scriptures, desiring to find errors in them.