Preface to the Letter of St. Paul to the Romans by Martin Luther (1522) Trans. Bro. Andrew Thornton, OSB, for the Saint Anselm College Humanities Program. (c)1983 by Saint Anselm Abbey. ["To be used freely with proper attribution."] Introduced by Stephen Tomkins. Edited for the web by Dan Graves. 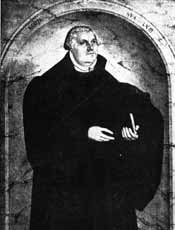 While kept in exile by Duke Frederick for his own safety, Luther translated the entire the Bible into the ordinary German of his day. He also included lengthy prefaces to some of the books, so that people who had never read the Bible before would have some help understanding it.

This is an extract from his Preface to Romans. For Luther, Romans is the very heart of the gospel, so he wants to turn the brightest spotlight on it. As he starts by saying, “This letter is truly the most important piece in the New Testament.”

The main aim of the Preface is to explain all the theological language Paul uses in Romans such as “grace” and “faith.” “Otherwise” he says “there is no use in reading it.” In the extract below he explains law, and faith.

Catholic doctrine taught that God makes us righteous by giving us the strength to keep his laws. In response to this Luther is at pains to define law in a way that makes it impossible for us to keep.

Luther’s translation quickly became the German Bible. It was so well—read that it molded the German language — so you can imagine the influence that this preface has had. In it Luther unpacks for the common Christian the meaning of the essential Protestant belief: it is not the good we do that puts us right with God, it is the good we trust him to do in us. We are justified by faith, not works.

This letter is truly the most important piece in the New Testament. It is purest Gospel. It is well worth a Christian’s while not only to memorize it word for word but also to occupy himself with it daily, as though it were the daily bread of the soul. It is impossible to read or to meditate on this letter too much or too well. The more one deals with it, the more precious it becomes and the better it tastes. Therefore I want to carry out my service and, with this preface, provide an introduction to the letter, insofar as God gives me the ability, so that every one can gain the fullest possible understanding of it. Up to now it has been darkened by glosses [explanatory notes and comments which accompany a text] and by many a useless comment, but it is in itself a bright light, almost bright enough to illumine the entire Scripture.

To begin with, we have to become familiar with the vocabulary of the letter and know what St. Paul means by the words law, sin, grace, faith, righteousness, flesh, spirit, etc. Otherwise there is no use in reading it.

You must not understand the word law here in human fashion, i.e., a regulation about what sort of works must be done or must not be done. That’s the way it is with human laws: you satisfy the demands of the law with works, whether your heart is in it or not. But God judges what is in the depths of the heart. Therefore his law also makes demands on the depths of the heart and doesn’t let the heart rest content in works; rather it punishes as hypocrisy and lies all works done apart from the depths of the heart. All human beings are called liars (Psalm 116), since none of them keeps or can keep God’s law from the depths of the heart. Everyone finds inside himself an aversion to good and a craving for evil. Where there is no free desire for good, there the heart has not set itself on God’s law. There also sin is surely to be found and the deserved wrath of God, whether a lot of good works and an honorable life appear outwardly or not.

You must get used to the idea that it is one thing to do the works of the law and quite another to fulfill it. The works of the law are every thing that a person does or can do of his own free will and by his own powers to obey the law. But because in doing such works the heart abhors the law and yet is forced to obey it, the works are a total loss and are completely useless. That is what St. Paul means in chapter 3 when he says, “No human being is justified before God through the works of the law."... How can such a work please God, if it proceeds from an averse and unwilling heart?

But to fulfill the law means to do its work eagerly, lovingly and freely, without the constraint of the law; it means to live well and in a manner pleasing to God, as though there were no law or punishment. It is the Holy Spirit, however, who puts such eagerness of unconstrained love into the heart, as Paul says in chapter 5. But the Spirit is given only in, with, and through faith in Jesus Christ, as Paul says in his introduction. So, too, faith comes only through the word of God, the Gospel, that preaches Christ: how he is both Son of God and man, how he died and rose for our sake. Paul says all this in chapters 3, 4 and 10.

That is why faith alone makes someone righteous and fulfills the law; faith it is that brings the Holy Spirit through the merits of Christ. The Spirit, in turn, renders the heart glad and free, as the law demands. Then good works proceed from faith itself. That is what Paul means in chapter 3 when, after he has thrown out the works of the law, he sounds as though the wants to abolish the law by faith. No, he says, we uphold the law through faith, i.e. we fulfill it through faith.

Sin in the Scriptures means not only external works of the body but also all those movements within us which bestir themselves and move us to do the external works, namely, the depth of the heart with all its powers.

Faith is not that human illusion and dream that some people think it is. When they hear and talk a lot about faith and yet see that no moral improvement and no good works result from it, they fall into error and say, “Faith is not enough. You must do works if you want to be virtuous and get to heaven.” The result is that, when they hear the Gospel, they stumble and make for themselves with their own powers a concept in their hearts which says, “I believe.” This concept they hold to be true faith. But since it is a human fabrication and thought and not an experience of the heart, it accomplishes nothing, and there follows no improvement.

Faith is a work of God in us, which changes us and brings us to birth anew from God (cf. John 1). It kills the old Adam, makes us completely different people in heart, mind, senses, and all our powers, and brings the Holy Spirit with it. What a living, creative, active powerful thing is faith! It is impossible that faith ever stop doing good. Faith doesn’t ask whether good works are to be done, but, before it is asked, it has done them. It is always active. Whoever doesn’t do such works is without faith; he gropes and searches about him for faith and good works but doesn’t know what faith or good works are. Even so, he chatters on with a great many words about faith and good works.

Faith is a living, unshakeable confidence in God’s grace; it is so certain, that someone would die a thousand times for it. This kind of trust in and knowledge of God’s grace makes a person joyful, confident, and happy with regard to God and all creatures. This is what the Holy Spirit does by faith. Through faith, a person will do good to everyone without coercion, willingly and happily; he will serve everyone, suffer everything for the love and praise of God, who has shown him such grace. It is as impossible to separate works from faith as burning and shining from fire. Therefore be on guard against your own false ideas and against the chatterers who think they are clever enough to make judgments about faith and good works but who are in reality the biggest fools. Ask God to work faith in you; otherwise you will remain eternally without faith, no matter what you try to do or fabricate.

Now righteousness is just such a faith. It is called God’s righteousness or that righteousness which is valid in God’s sight, because it is God who gives it and reckons it as righteousness for the sake of Christ our Mediator. It influences a person to give to everyone what he owes him. Through faith a person becomes sinless and eager for God’s commands. Thus he gives God the honor due him and pays him what he owes him. He serves people willingly with the means available to him. In this way he pays everyone his due. Neither nature nor free will nor our own powers can bring about such a justice, for even as no one can give himself faith, so too he cannot remove unbelief. How can he then take away even the smallest sin? Therefore everything which takes place outside faith or in unbelief is lie, hypocrisy and sin (Romans 14), no matter how smoothly it may seem to go.