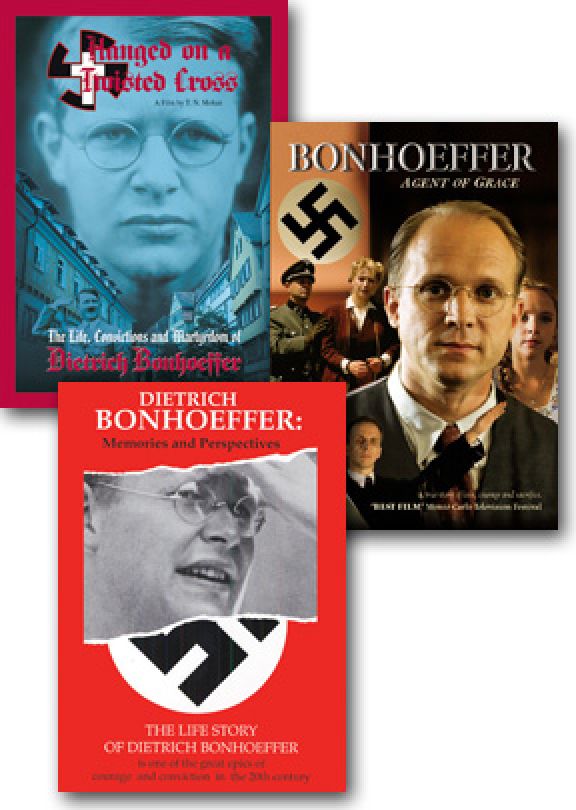 Films on the life and work of Dietrich Bonhoeffer.

SPECIAL OFFER -- BUY AGENT OF GRACE DVD and HANGED ON A TWISTED CROSS DVD AND GET MEMORIES AND PERSPECTIVES DVD FREE!

Agent of Grace -- What is a moral person to do in a time of savage immorality? That question tormented Dietrich Bonhoeffer who actively opposed Hitler and the Nazis. His convictions cost him his life. The Nazis hanged him on April 9, 1945, less than a month before the end of the war. Bonhoeffer's last years, his participation in the German resistance and his moral struggle are dramatized in this DVD. More than just a biographical portrait, Bonhoeffer: Agent of Grace sheds light on the little-known efforts of the German resistance. It brings to a wide audience the heroic rebellion of Dietrich Bonhoeffer, a highly regarded Lutheran minister who could have kept his peace and saved his life on several occasions but instead paid the ultimate price for his beliefs.

Hanged on a Twisted Cross -- Dietrich Bonhoeffer was executed by the Nazis just days before the Allies defeated Germany in World War II. This gripping documentary narrated by Ed Asner captures the life, times, and thought of Bonhoeffer. Using rare archival footage, documents, and visits to original locations, we get an intimate portrait of a man whose life and writings grow in their influence and speak powerfully to issues of our own day some 60 years later.

How does a man of peace come to assist violence in combating unrestrained evil? What do you do when deep-seated patriotism for your nation compels you to oppose your fatherland and its demonic leader? What course do you take when your love for the Gospel conflicts with your tragically compromised church? What is the responsibility of a follower of God when others are being persecuted and sent to prison camps and gas chambers?

As shown in this two-hour program, Dietrich Bonhoeffer confronted these and other issues with a searching Biblical faith and personal courage in a way that speaks to every generation.

Dietrich Bonhoeffer: Memories and Perspectives -- A close and intimate portrait of Dietrich Bonhoeffer. This DVD follows the life of the martyred theologian as vividly recalled by those closest to him: his friends, family, and students. Included are Bonhoeffer's family photographs that have never been shown before. An emotionally wrenching documentary that probes the struggles and motivations of Dietrich Bonhoeffer in a way that makes one ask anew: "What does it mean to be a Christian in the 20th century world?" B&W