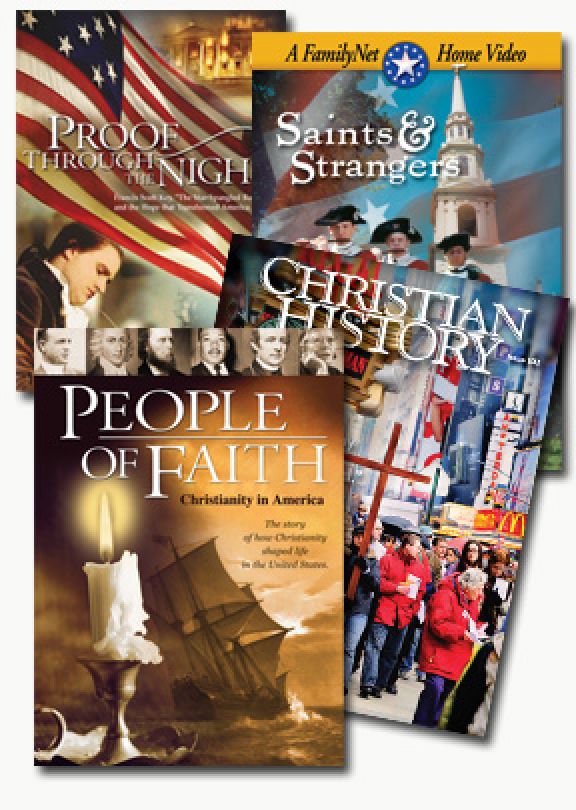 Proof Through the Night - Set of Four

Proof Through the Night
Oh Say, Can You See...? In the 200 years since Francis Scott Key first wrote those words on the back of a letter they have inspired millions. The hope and joy expressed in the American National Anthem are so moving that more than five million people signed petitions for its official adoption. Yet within those words is an expression of a Christian's faith and gratitude for deliverance.

Told though the words of eyewitnesses and those who knew him best, this hour-long presentation tells the story not only of the song, but of the man and the beliefs that inspired it.

Francis Scott Key was a lawyer, a father and a church leader. But he was not a songwriter or a professional poet. Yet, his words captured the sense of hope and optimism that continue to define America.

As he wrote: May the heaven rescued land
Praise the power that hath made and preserved us a nation
Then conquer we must
When our cause it is just
And this be our motto
In God is our trust.

We are responsible for the most sacred of trusts--
to our country, to the world, to our God

SPECIAL FEATURES
- Optional English Subtitles
- Epilogue: What Happened to These People?
- A Poem Becomes an Anthem: The 177-year-long adoption process
- Extended interviews
- Dramatic reading of all four verses of "The Star-Spangled Banner"

Saints and Strangers w/Free Study Guide
What about the hotly debated issue regarding the Christians roots of the American colonies? Was the Gospel the basis of the formation of a nation like none other in all history? What role did faith and religion play in the founding of America? From the earliest settlers in Jamestown, through the fervent patriotism of the pre-Revolutionary period, and the eventual formation of the original colonies into the United States of America, this documentary examines the religious and spiritual roots of the men and women who founded our country.

Saints and Strangers addresses religious influences from the time of the Mayflower to the Great Awakening, from Plymouth Rock to the War of Independence. It examines the groups of the faithful who were crucial influences during the colonial period — the Church of England, the Puritans, Baptist, Quakers, and others.

Also available is a <a href=/detail.taf?_function=detail&a_product_id=30875 target="_blank">48-page guide</a> with reproducible student handouts. To download an excerpt from the guide, click on the link above for "Saints and Strangers Excerpts from the Study Guide."

People of Faith
Is America now or has it ever been a Christian Nation?
What is the meaning of separation of church and state?
How can the church be a faithful Gospel witness in a pluralistic society?
What will the church look like in the future?

People of Faith: Christianity in America brings perspective to these questions and more.

Survey the history of Christianity in the United States from before the Pilgrims to the present in this stunning DVD series. You’ll gain valuable perspective on the people and ideas that shaped America and see how it came to be the first nation in history based upon the ideal of religious liberty.

In this six episode, two-disc DVD set you’ll meet the spiritual visionaries, leaders and entrepreneurs who shaped Christianity across the centuries and dramatically impacted the culture we live in today, including Jonathan Edwards, Harriet Beecher Stowe, Archbishop John Joseph Hughes, Martin Luther King Jr. and Billy Graham among many other influential Protestant and Catholic Christians.

1. Faith in America: From Monarchs to the Marketplace
2. Many Mansions
3. Rebels with a Cause
4. Challenges and Change
5. Home Grown Saints
6. The Future of Christianity

This issue of Christian History explores the diversity found in the churches of America and their complex relationship with the broader culture.