The political backdrop of this issue

— May 16 Sykes-Picot Agreement divides the Middle East between Britain and France.

— July 1 Battle of the Somme begins.

— April 2 Wilson asks the US Congress to declare war.

— June 25 First American troops land in France. The first US soldiers will be killed in combat in October.

— July 17 Bolsheviks execute the tsar and his family.

— November 11 World War I ends on the Western Front.

—June 28 Combatants sign Treaty of Versailles ending WWI. In November the US Congress will refuse to ratify it.

— March 28 Spanish Civil War ends with the establishment of a dictatorship headed by Francisco Franco.

— July 10 Battle of Britain begins, culminating in the “London Blitz” on August 30.

— December 7 Japan attacks Pearl Harbor as part of invasions throughout the Pacific.

— June 3 Battle of Midway begins. It will result in a turn of the tide in the Pacific.

— July 17 Battle of Stalingrad begins. Germany expects easy victory but will be defeated in February 1943.

— August 23 Romania surrenders to the Soviet Union and joins the Allies.

— January 25 Allies win Battle of the Bulge and begin final assault on Germany.

— August 6 US drops atomic bomb on Hiroshima and on Nagasaki two days later.

The religious stories in this issue

— November 29 C. S. Lewis reaches the front lines in France on his birthday.

— September 8 Sergius of Mos-cow, leader of the Russian Orthodox Church since 1927, is finally allowed to become patriarch.

— February 23 For Lent the people of Park Street Church forgo one meal a week and donate to war relief.

— August 25 Chinese Communists kill John Birch. By 1953 all Western missionaries will be gone from China. 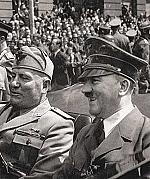