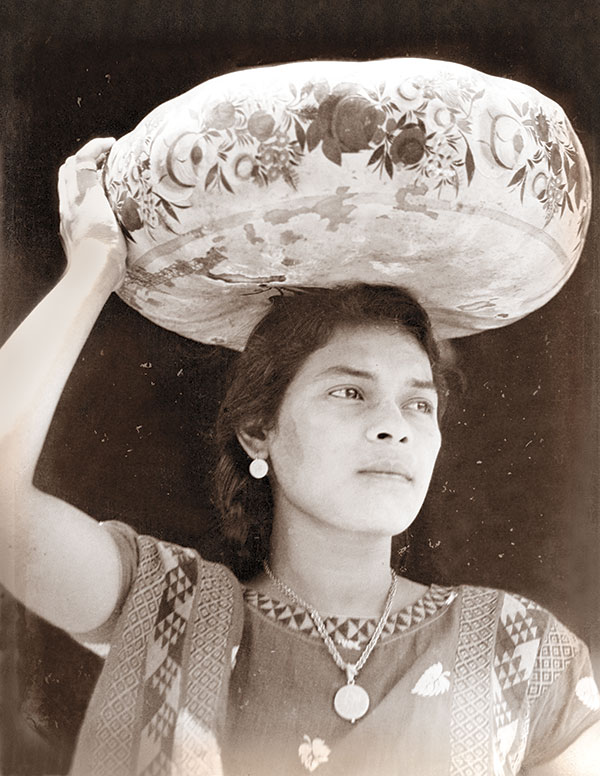 JESUS UPSET THE EXPECTED NORMS of first-century Jews. He regularly ate with sinners and tax collectors, spent time with the despised Samaritans, and elevated women from third-class citizens to first-rate followers of The Way as the implications of his redemptive work became clear (Gal. 3:28). Yet women’s place in the church had advanced little by the fifteenth century. The colonial enterprise in Latin America mirrored this when it gave men the primary responsibilities of the expanding Catholic Church.

Virgins of healing and succor

From the beginning of the colonial conquest, Latin American Christian women saw themselves through the lens of the Virgin Mary. The Iberian empires had already established this image as the feminine ideal of Christianity; they spoke of the Virgin as the ideal woman of God, representing her in art and architecture as an exceptionally beautiful European woman and also as the woman who led Christian warriors.

This mixed religious and political image formed a fundamental part of the conquest. For example Cortés in Mexico had a devotion to Mary under the name of the Virgin of Healing; when he conquered Tenochtitlan and renamed it Mexico City, he had shrines to the Virgin and St. Christopher set up in the existing temple in place of statues of the Aztec gods.

Pedro de Valdivia, conqueror of Chile, is said to have carried an 11-inch-tall statue of the Virgin into Santiago in 1540. The image survived the fighting and was renamed the Virgin of Succor in 1544 after the Spanish conquerors prayed to the image and reinforcements arrived to quell an indigenous uprising. These and similar stories led the Virgin Mary to become not only a very significant religious figure but also a political symbol (see “Mother of Mexico,” p. 21).

Above all the Virgin represented the religious ideal for noble women of the dominant class. These wealthy European women took the coveted spots in the first convents of the Spanish territories. Women could enter religious life just as men could, but unlike friars and priests, they spent their lives enclosed inside convent walls and were not allowed to evangelize.

The first convents in “New Spain” were established in the 1540s; in Brazil convents were not founded until 1677. Though they were connected to European religious orders such as the Carmelites or the Poor Clares (Franciscan), each one operated as an independent institution with its own constitution and rules.

Many convents were founded exclusively for daughters and other relatives of the powerful, the wealthy, and the connected. The Most Holy Trinity convent in Puebla, Mexico, started with 17 nuns; 14 of them were related to the founding patrons. Only women of pure European blood and legitimate birth could join; Jewish, Muslim, or indigenous women need not apply.

While the Santa Clara convent in Cuzco, Peru, and the Corpus Christi convent in Mexico City made exceptions to this, they still did not admit the lower classes. Founded in 1551 for a particular type of mestiza (a woman of mixed race), Santa Clara accepted the daughters of noble indigenous women and Spanish conquistadors with the goal of ensuring that these mestizas would be culturally Spanish.

Later in 1724 the Corpus Christi convent was founded in Mexico City exclusively for the daughters of indigenous nobles. The applicants were required to be full-blooded indigenous and prove they came from good Christian families who had never worked selling pulque (a traditional indigenous alcoholic drink) because it was considered a shameful occupation.

Two types of convents soon emerged: relaxed and reformed. In the relaxed convents, a nun lived in luxury in her own rooms, with expensive furniture, maybe her own kitchen, and a private altar. She might even have servants or slaves (full-blooded indigenous and black women) to take care of her personal needs. In the reformed convents, nuns lived more simply—in small cells, eating plain meals in community, following strict routines, and worshiping frequently.

Eventually convents became places where orphans were abandoned, widows found shelter, and parents would leave young girls until they either married or chose to take their own vows. Even though nuns lived in enclosure, they remained closely connected to a colonial society that considered them an important part of the spiritual health of the community at large.

The ideal nun served as a model to follow in feminine virtues such as chastity, humility, obedience, and modesty; though it seems contradictory, nuns were also considered good models for virtuous wives. Many considered nuns’ prayers to be particularly effective as it was believed they could release souls from purgatory or help ease divine wrath.

The community perceived convents as fortresses that intervened for their well-being and prevented evil. Unlike priests, nuns didn’t receive payments for religious services; donations and dowries financially supported the convents. This resulted in very powerful financial structures that could lend money to members of the local community. Nuns also sewed and embroidered, and educated girls who lived with them.

Over time, especially in the relaxed convents, the life of a nun came to resemble more and more the life of an upper-class lady rather than a life of prayer and contemplation. These nuns gave elegant parties, purchased rich food, produced secular plays, hired many servants, wore extravagant jewelry, entertained visitors (including men), and traveled freely. In one convent in Lima, they were reprimanded in the 1750s for trading in habits for expensive secular clothing and staging their own bullfights on the convent’s grounds!

Not every religious (or hopefully religious) woman lived in a convent. Another group of laywomen called the beatas took no vows or only simple ones; they lived alone without the formal supervision of a male confessor or a religious community. Believing that beatas received favors from God, people often sought these women out for counsel on sacred and secular matters, affording them an important role in the community at large. Indeed living as a beata appealed to many women because it was one of the few options for living alone as a respectable single woman. However Roman Catholic leaders looked with suspicion upon the appeal of this seemingly individualistic religious path. Trials for these holy women were rare, but still the Holy Office kept them under its watch.

Overall women experienced many forms of limitation while trying to live out their faith in the colonies. Nonetheless women such as Rosa de Lima (1586–1617), named the first saint of the Americas; Sor Juana Inés de la Cruz (1648–1695), writer, poet, and philosopher; and Catarina de San Juan (1607–1688), a Mexican lay holy woman of Asian descent, produced powerful testimonies (see “Charity toward all,” pp. 44–47).

The coming of Protestantism changed this picture in some ways, but not in others. During the Spanish Inquisition (which lasted from the sixteenth century through the nineteenth century), Protestantism was considered heresy, and tribunals banned Protestant books and any form of “Lutheranism.” But not long after the Latin American colonies became independent (see “Strangers in a strange land,” pp. 29–33), Protestantism began to make inroads.

After half of Mexico’s territory became part of the United States in 1848, US Protestants launched missions through the Southwest and Northern Mexico, maintaining that Spanish evangelization during the colonial period had not been effective at all. Believing that the former Mexican citizens needed a real conversion, Scottish immigrants flooded Argentina, Uruguay, and Chile, bringing Presbyterianism with them.

After 1870 Protestant missionary agencies—including female missionaries—from the United States began to actively engage in Latin America. Initially they concerned themselves mainly with the salvation of souls, but eventually Protestants became known for their work in education and medicine.

In the twentieth century, women moved into politics. By the end of the century, women had served as heads of state in Panama, Ecuador, Nicaragua, Bolivia, and Argentina. Even so the mainline Protestant churches remained largely male dominated until the growing Pentecostal movement gave more freedom to female church leaders.

For example Romana Carbajal de Valenzuela (d. 1918) accepted the gospel during the Pentecostal movement on Azusa Street in Los Angeles. After her conversion she felt called to go back to her hometown in Mexico as a missionary. In 1914 she baptized 12 of her relatives in the name of Jesus only, becoming an evangelist, missionary, and founder of the Apostolic Church of Faith in Jesus Christ (Oneness Pentecostal). She died in 1918, and male pastors Rubén Ortega and Miguel García carried the church forward.

Leoncia Rosado Rosseau (1912–2006), known as “Mama Leo,” spread the Pentecostal gospel both in Puerto Rico and on the US mainland. Rosado was born in Tao Alta, the second of five children; she converted during a revival in the Disciples of Christ in Puerto Rico in 1932. She preached all throughout the island and in 1935 left for the mainland as a missionary to share the gospel with the Spanish-speaking community in New York City.

There she cofounded the Damascus Christian Church in Spanish Harlem in 1939 and in 1957 began the Damascus Youth Crusade drug rehabilitation program. Mama Leo was known for her remark, “Nosotras las mujeres no trataban como soldado de 3ra clase.” (“We women were treated as third-class soldiers.”) After being saved from addiction and converted under her ministry, pastor John Gimenez wrote about her in his memoir Up Tight!:

All of us—directly or indirectly—trace our “delivery” to that little Spanish church at 861 East 162nd Street. It was God’s house all right. He was there. . . . In the little parlor you see Mom Rosado sitting with the Bible in her lap and she’s got two or three boys sitting around, listening to her explain the message of God. . . . And people come in—broken people, rotten people, no goods, unwanteds. The misfits of society walk through those open doors to new life.

In the twentieth century, Roman Catholic nuns also experienced change. Seclusion became less common, and they were able to fully engage with the communities around them. One example of these “new nuns” was Albertina Ramirez Martinez (1898–1979), a mystic and founder of the first Central American religious order, Missionary Servants of Christ the King. Martinez was born in Managua, Nicaragua, in 1898 to a wealthy Christian family. In fact she was the granddaughter of the first president of Nicaragua and also related to national heroine Rafaela Herrera (1742–1805), who at age 19 had helped soldiers defend the Fortress of the Immaculate Conception in El Castillo.

Much of Martinez’s work was inspired by Catholic Action, a collection of groups trying to encourage Catholic influence in society. They focused on missions in marginalized urban neighborhoods, schools, temporary parishes, and eventually missionary work in rural areas.

In 1942 the Catholic archbishop authorized Marti-nez and some young women to start their own association and devote their lives to development of Catholic Action programs. Nicaraguan writer Edgard Zúñiga remarked of her nuns: “Sonaba como algo absurdo e impensable. Las Congregaciones religiosas se fundaban en Europa. No en un país pequeño, pobre y sin ninguna importancia.” (“It sounded like something absurd and unthinkable. [Religious congregations] were based in Europe. Not in a small, poor and unimportant country.”)

These women missionaries continued their work with much enthusiasm—distributing the sacraments, organizing missions to parishes, teaching the catechism, and visiting prisons, hospitals, and other charity centers. Sister Albertina died in Granada, Spain, after falling ill and leaving Nicaragua due to the Civil War there in 1979. After her death an all-male monastery was founded dedicated to the same mission, known as Religiosos Albertinianos. In 2001 her followers began to seek her canonization.

In the end the life and work of women in Latin American Christianity had a very complex history, containing much that is violent, tragic, and unjust. Yet history can also be redemptive; some of that redemption can be seen through the achievements of Latin American women in social, educational, and political spheres. At the same time, the Latin American church still struggles to recognize and promote the value and dignity of women. CH