CRèME EGGS AND MILK CHOCOLATE BARS might seem like the height of decadence, but, believe it or not, some of the world’s leading confectioners got into the candy business to promote healthy living. The Cadburys, for example, filled their sweets with dreams of social progress and Christian compassion.

Victorian Britain, home to John Cadbury and his sons Richard and George, had serious problems. Industrial workers, including mothers and children, spent their days in dirty, dangerous factories and their nights in cramped tenements. Widespread alcoholism deepened the workers’ poverty and contributed to domestic violence. While the Salvation Army attacked these ills with “soup, soap, and salvation,” the Cadburys fought back with cocoa.

The Cadburys belonged to the Society of Friends, also known as the Quakers. As dissenters from the Church of England, they were closed out of the country’s Anglican-allied universities, and as pacifists, they would not serve in the military. So they became entrepreneurs.

In 1831 John opened a shop near the center of gritty Birmingham, selling coffee and tea—wholesome alternatives to harder drinks. He soon added cocoa to his product list, powdering it himself with a mortar and pestle. In 1861 he retired and ceded control of operations to his two oldest sons. By 1878 the business had grown to employ 200 workers. It was time to build a larger facility.

The brothers purchased land in the countryside near Birmingham and dubbed the site Bournville. They intended to build not only a state-of-the-art factory, but a village as well, to enable their employees to escape the dingy city. The village featured modest cottages with gardens, spacious public parks, swimming pools, and, eventually, shops, schools, and churches. All Bournville lacked was a pub, a concession to the founders’ convictions about alcohol.

The Cadburys sought to make work life pleasant, too. The factory complex featured such avante garde amenities as heated dressing rooms, a kitchen, and cricket fields. Days began with Bible study, and continuing education classes took place in the evenings. The brothers periodically circulated among the workers, listening for good ideas and occasionally performing odd jobs. One worker recalled, “To see Mr. George and Mr. Richard go down on their knees and crawl under a table to see if the water pipes were hot enough made a great impression on all of us.”

In addition to good business sense, Christian conviction drove much of this innovation. George Fox, the founder of the Quakers, had insisted that all people possessed an “inner light,” which linked them to God and accorded them equal stature with each other. Influenced by this principle, the Cadburys board governed by consensus, and company committees included representatives from all levels of the organization. The bright cottages and continuing education opportunities likewise aimed to elevate workers’ dignity.

The enlightened chocolatiers were not without their critics. Trade unionists and socialists derided the Cadburys for giving their workers just enough money and power to keep them in their place. Other observers sneered at the paternalism of Mr. George and Mr. Richard, who would, for example, dismiss a female employee with a Bible, a rose, and a small monetary gift when she was about to marry. They did not believe wives should work.

Despite these gripes, the Cadburys enjoyed the affection of hundreds of loyal workers and excited the admiration of many other late Victorian industrialists. Upon George’s death in 1922, more than 16,000 mourners paid their respects at the Bournville “factory in a garden.”

Elesha Coffman is a doctoral student at Duke University and a senior editor of Christian History & Biography.

He tasted many philosophies, but he was always stuck on reality.

J. I. Packer and Jerry Root

Wesley set out to renew the church he loved and he was prepared to employ any appropriate material from the whole history of Christianity to do it.

From the Archives: A Short Rule of Life for Priests, Lords, and Laborers

The three “estates of the realm ” in medieval England were the priest, the knight, and the laborer. In a tract, written in English, John Wycliffe addressed all three. 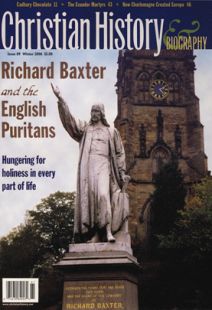