Some good overall books on the Quaker movement are Stephen Angell and Pink Dandelion, The Oxford Handbook of Quaker Studies (2013); Pink Dandelion, An Introduction to Quakerism (2007) and The Quakers: A Very Short Introduction (2008); John Punshon, Portrait in Grey: A Short History of the Quakers (2003); Howard Brinton, Friends for 350 Years (2002); Walter R. Williams, The Rich Heritage of Quakerism (1987); and D. Elton Trueblood, The People Called Quakers(1985).

Guides to Quaker beliefs include Paul Anderson, Following Jesus (2013); Wilmer Cooper, A Living Faith: An Historical Study of Quaker Beliefs (1990); Leonard Kenworthy, Quakerism: A Study Guide on the Religious Society of Friends (1981); and Rufus Jones, The Faith and Practice of the Quakers(1927).

The Quaker movement in America, including its various splits and conflicts, is covered in Hamm, The Quakers in America (2003) and The Transformation of American Quakerism: Orthodox Friends, 1800–1907 (1988); H. Larry Ingle, Quakers in Conflict: The Hicksite Reformation (1998); Hugh Barbour and J. William Frost, The Quakers (1988); and Fager, Remaking Friends: How Progressive Friends Changed Quakerism and Helped Save America(2014).

Finally, read about Quakers worldwide in Ron Stansell, Missions by the Spirit (2010); Herbert and Beatrice Kimbal, Go into All the World: A Centennial Celebration of Friends in East Africa (2002); Ane Marie Bak Rasmussen, A History of the Quaker Movement in Africa (1995); and Tom and Liz Gates, Stories from Kenya (1995)

Videos treating the Quaker story include The Quakers: That of God in Everyone; Saints and Strangers; People of Faith; and PAX Service.

Quaker.org is an umbrella website with links to practically everything Quaker-related: from Yearly Meetings of all the branches of Quakerism, to bibliographies, to meetinghouse locations, to Quaker businesses, to genealogy, to misuses of the name “Quaker.” Some related blogs are at Planet Quaker.

The three major modern strands of Friends are at Friends General Conference, Friends United Meeting, and Evangelical Friends Church International. Quakers in the World collects information about Quakers trying to put Quaker testimonies into practice worldwide, and it has many resources for educators. Quakers in Britain is the umbrella British Friends site with both historical and current resources. QuakerPages collects primary source documents dealing with Friends, including a large collection of sermons.

Friends founded many educational institutions, and many maintain robust historical information on their websites. Check out the Quaker resources at Swarthmore College, Earlham College (including the Newlin Quaker Center, and George Fox University. You might also enjoy perusing the website of Renovaré, a devotional organization welcoming all streams of Christian spirituality but founded by Quaker author and pastor Richard Foster, author of Celebration of Discipline (3rd ed. 1998).

This article is from Christian History magazine #117 The Surprising Quakers. Read it in context here!

People's Reformation, Did you know? 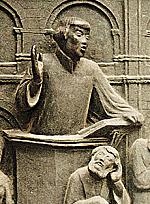